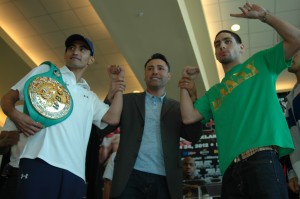 Molina, quiet and humble, took to the podium first.

“First off I’d like to thank God for even letting me be here… I’m excited and happy to be fighting in Texas… I’m ready to go. I’m ready for anything on Saturday night.” 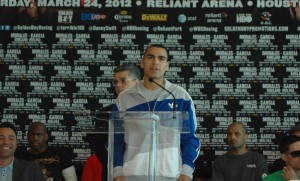 Next, Oscar introduced Kirkland’s trainer, Ann Wolfe, who has become well-known in the world of boxing, not only because she’s a woman, but also due to her unique and tough training methods.  Wolfe appeared focused and serious, never cracking a smile while she spoke at the podium.

“I’d like to thank God for this opportunity.  Um…I just say we come to fight.  I know Carlos ready.  I know James ready.  It was like, if Carlos does this, if James does this.  If if’s, and’s and but’s were candies, cherries and nuts, we’d all have a Merry Christmas.  So we gotta come Saturday and we’ll all see what’s gonna happen.”

Kirkland took to the stage, and just like his trainer, was also very focused and serious.

“First of all, I want to give thanks to God for this opportunity… Looking forward to fighting anybody at 154 after this fight.  Looking forward to getting a world title shot.  But until then, you know, know this is gonna be a hell of a fight and give everybody what they want to see and that’s action.”

Garcia’s father, and trainer, Angel Garcia was first up to the mic.  He was very passionate, and he has full confidence in his son’s ability.

“First of all, I want to thank God for giving me the opportunity to be here with Danny… It’s not gonna be hard, but it’s not gonna be easy… March 24th, Saturday, believe this, Danny will be the WBC world champion.” 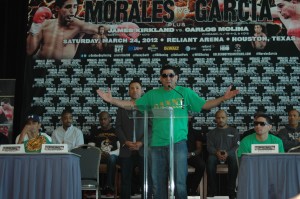 Garcia shared his father’s same passion.  Although he was respectful to Morales, Garcia was also very confident and believes it’s his time to be world champion.

“You know, first of all, I wanna thank God.  I wanna thank, uh, my father… My dad does the talking, I back it up with the fists… I was a fan of [Morales], never thought I’d be in the ring with him.  You know, I respect what he’s done for the sport.  Nobody can take that away from him.  But it’s a new time, it’s a new era.  It’s my time, it’s ‘Swift’ time.” 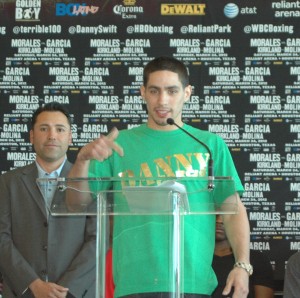 Jose Morales, father and trainer of Erik Morales, took to the stage next.

“Good afternoon to everybody.  Thank you for being here.  I want to congratulate Danny on his career.  22 and 0 — good record… He’s young and hungry and strong, just like my son was when he first challenged for the title.  Now, as a veteran, he’s gonna have to defend his title against a young fighter like Danny Garcia.”

Last to the podium, was the legendary fighter himself, Erik Morales.  Morales was respectful, but stood his ground as only a champion can do.

“Good afternoon.  I’ve heard a lot of things this week… The real question is: Do you think I would accept a fight to lose?”

After that strong opening, Morales continued.

“Do you really think that strength and speed is better than technique? Speed and power are just two aspects of fighting…having technique is obviously always very important as well and beat that.  I’m happy to be here.  I’m ready for this fight… I’ve heard it all before.  Everybody says they’re gonna do this and that, and they’re gonna beat me, but are they really that stupid?… I’m going to officially change my name.  I’m not going to be “El Terrible” anymore.  I’m going to be “The Professor” and give classes.” 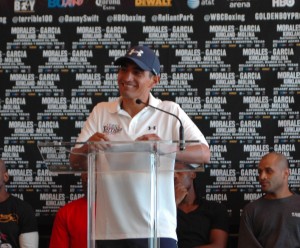 And with the bravado and confidence of Erik Morales, the press conference closed as the all the fighters posed for photos.  Should be an exciting evening on Saturday.