Former two division champ “Super” Zab Judah (42-7, 29 KOs) completely dominated Vernon Paris (26-1, 15 KOs) over nine completely one sided rounds.  Judah and Paris squared off in a twelve round IBF title eliminator to headline the second NBC Sports Fight Night card promoted by Main Events.  What was considered a pick-em fight turned out to be a one sided beat down with Judah getting a ninth round TKO win. 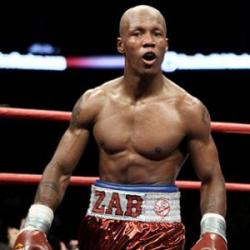 Judah, fighting in his hometown of Brooklyn, NY made it look easy against Paris after being dominated by Amir Khan  in his last fight.  To the delight of the vocal Brooklyn crowd, Judah was simply on a different level than his now formerly undefeated opponent, Paris.  It was apparent in the first minute of the fight that Judah was far faster and far more skilled in his craft.

To describe one round describes all nine.  Judah would control distance with the jab and landed heavy straight left hands with ease.  As time went along Judah mixed in his combinations ripping Paris with the right uppercut along with his straight left.  Once Judah added inside fighting where his experience and craft was apparent it was clear Paris had no chance.

Paris, who was extremely talkative and confident leading up to the fight had absolutely no answer for the thirty-year-old vet.  Paris was befuddled from the first bell by the speed and technique of Judah.  It appeared Paris had no real plan for the southpaw other than using his toughness to prove a mantra of will over skill.  Unfortunately for Paris, when the differential in skill is as pronounced as it was tonight, will fails to factor into the outcome.

Once again Judah revives his career when it appeared he could be done after the loss to Khan.  Many fans and media felt Judah would wilt against the rugged Paris.  But Judah had other ideas believing his skill and experience would carry him to a win.  He was right as he closed the show in the ninth round when he once again stunned Paris with a big left.  He followed up firing away on his opponent in the corner.  When Paris had absolutely no answer and was not punching back while taking punishment referee Steve Willis had seen enough, stepping in to the stop the bout at 2:20 of round nine.

Judah talked after the fight about giving credit to his savior Jesus Christ and that he would have ended the fight earlier if Paris did not enter survival mode.

“All credit to my lord and savior Jesus Christ for giving me the strength, the ability, to rebound myself.  I thank him first.  I take zero credit tonight.  God fought my battle.  I prepared the temple and he fought the battle for me.”

Judah becomes the IBF mandatory for the winner of the rematch May 19 between Amir Khan and Lamont Peterson.  Khan, who already handily beat Judah, will likely look for bigger fish if he wins the rematch.  Judah may get a shot at Peterson if he wins as Judah tries to once again become a world title holder.  At the least he showed that against the right opponent he can still be exciting and still has the speed and punching power that make him a dangerous fighter.

In a heavyweight fight that was far closer than anyone expected, Tomasz Adamek (45-2, 28 KOs) won a unanimous decision over Nagy Aguilera (17-7, 12 KOs) in the co-main event.  Adamek gets the win but was expected to blow out Aguilera, who clearly took the fight seriously and came in to the match in much better shape than his last few fights.

Adamek was coming off his knockout loss last year to Vitali Klitschko when he challenged for the heavyweight title.  Aguilera had lost three of his last four including a knockout loss to Chris Arreola.  He was expected to be a good comeback opponent for Adamek but he provided a stiff challenge.  Aguilera was in the fight early and game throughout in what became an exciting competitive fight.

Aguilera was able to fight on even ground and do enough to win a few rounds through the first four.  Aguilera even stunned and hurt Adamek in round two.  As the fight went along though the far more skilled Adamek picked up steam and began running away with the rounds.  With his Polish faithful chanting in the crowd, Adamek was able to land hard shots that changed the course of the fight.  Adamek hurt Aguilera badly at the end of the fourth and stunned him several more times in the fight.

Adamek takes home the unanimous decision by scores of 99-91 and 100-90 twice.  The two shutout cards seemed excessive as Aguilera had success early and seemed to at least win a round or two before Adamek took over.  The Boxing Tribune had it 98-92.

Adamek did what he had to do and will likely be in line for another big fight soon.  Chances are he will headline the NBC Fight Night card on June 16 which will be held at the Prudential Center where Adamek packs the building with his rowdy Polish faithful.

In the TV opening bout young Bryant Jennings (13-0, 6 KOs) of Philadelphia was faster, busier, better, stronger, and just simply hungrier than former champion Sergei Liakhovich (25-5, 16 KOs).  Jennings was far more active the entire fight as he put a beating on Liakhovich for nine rounds of a scheduled ten breaking Sergei’s nose and swelling his left eye.

The opening round of the ten round heavyweight bout was fairly even, but from round two to the end it wasn’t even close.  Jennings blasted Liakhovich with a stiff jab and heavy arcing punches from both hands to the body and head.  In round four Jennings came out aggressive and forced a vicious exchange in the beginning of the round where he got the best of the action putting a hurt on the former champ, who looked like his best days are clearly behind him.

In round five Jennings twice stunned Liakhovich and had him hurt at the end of the round.  Jennings continued his domination rounds six through eight, mixing movement and flurries to keep his opponent off balance and unable to get into the fight.  Liakhovich’s face was getting worse and his corner made it clear they were considering stopping it if he did not show something.  Jennings punched Liakhovich all over the ring including teeing off in the last thirty seconds with Liakhovich backing away and blood flowing profusely.

Liakhovich was all but done and on the advice of the ring doctor referee Eddie Claudio stopped the fight between rounds.  The official end was a TKO win for Jennings at 3:00 of round nine.

For Liakhovich, who took this fight after he was supposed to open the first Fight Night card back in January, but had his opponent Eddie Chambers bow out six days for before the fight, it may be time to hang it up.  Liakhovich is six years removed from his win over Lamon Brewster that won him the WBO title.  He has lost three of his last five and was thoroughly dominated by a young fighter with far less experience.

Jennings talked afterwards how he told everyone he would be able to do what he did in the ring tonight.

“Comfortability like I said.  Elite Klass, that’s what I practice.  I practice to be elite; I told you guys that at the meeting I practice to be perfect.  Honestly I didn’t even fight the fight that I wanted.  I was too cautious.  I could have done a lot more.  But you know I got it out the way.  He didn’t have nothing for me.  I didn’t even feel a punch.”

Jennings continued his fast track to entering the conversation of being a major heavyweight contender.  Jennings stepped in on short notice to headline the first Fight Night card defeating fellow undefeated heavyweight prospect Maurice Byarm to announce his presence on national TV.  The win over Liakhovich, a former champ who has a long pedigree and top level skill, in such dominating fashion will have people taking notice.