The night opened with junior middleweight Daquan Arnett winning by knock-out over the hapless Fabian Cancino (0-4) with a sharp, overhand right at 1:15 of round one.  Arnett improves to 2-0 in his young career.

Next up was Jermall Charlo (9-0, 5 KOs), who told me this week that he was in love with his jab.  I have to admit, after seeing it in person, I might love it, too.  Against fellow junior middleweight Shawn Wilson (5-9, 1 KO), he established his jab early and often, before opening up with a myriad of heavy-handed body shots.  He dropped the stocky Wilson with a short right hook in the third, but was content to potshot him through the rest the round.  The fight continued until the fifth when Charlo dropped Wilson twice more, the last being a body shot that brought Wilson down to his knees, prompting the referee to declare Charlo the winner by TKO. 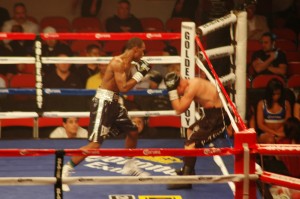 In his first bout since his lone defeat, welterweight Lanard Lane (13-1, 8 KOs) got back in the win column by defeating Robert Ramos (7-3-3) by TKO in round 8.   Lanard dropped Ramos in round six and high kicked over him as he kneeled in pain.  He had him badly hurt in round seven, but Ramos gained reprieve by spitting out his mouthpiece which halted the action momentarily.  Lane really put the pedal to the medal in the last round which caused the referee to halt the action with Ramos still standing but refusing to engage. 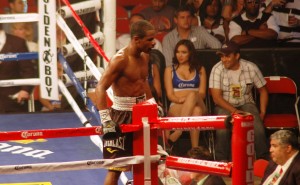 Lane looked busy, quick and willing to engage, which means he could be showing up on your television in the not-so-distant future.

Jamie “The Nuisance” Kavanagh (9-0-1, 4 KOs) is an offense-first-style fighter who barrels in aggressively and lets his hands go. That leaves him open to his opponent’s shots, but Kavanagh appears to be okay with that.   He dropped his opponent, Cesar Cisneros (3-4-3, 1 KO), in round one with thunderous hooks, then opened his eye up in the third with more of them.  A fighter like Kavanagh is like a shark, so the blood just increased his fervor to engage.  Ultimately, he went on to roll right over Cisneros until the referee wisely halted the action in round number five. 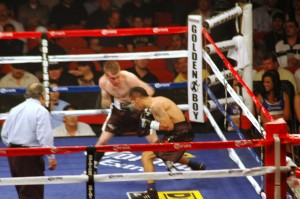 It’s hard to gauge a fighter like Kavanagh’s ceiling, but it’s easy to recognize that fans will enjoy watching him find out what it is.

The muscle-bound Chris Chatman (10-2-1, 5 KOs) looks more like a bodybuilder than a fighter, but that didn’t intimidate Jermell Charlo (17-0, 8 KOs) who knocked out the boxer, lovingly dubbed “mini-hulk” by those on press row, with a thunderous right hand that sent him straight to the canvas like a ton of bricks.  The punch brought everyone to their feet because of its ferocity.  Even Chatman got into the act by making it to his feet but he was far too dazed to continue as he teetered around helplessly until it was waved off.  It was the knockout of the night for sure, and one of the better I’ve seen this year. 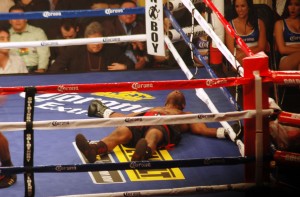 The fight was stopped at 1:22 of round number three.