Eduard “Eddy” Gutknecht (23-1, 9 KOs) will make his third defense of a regional light heavyweight title when he takes on Tony Averlant (17-5-2, 4 KOs) on Saturday, March 31st.  The bout is featured on the undercard of Arthur Abraham (33-3, 27 KOs) vs. Piotr Wilczewski (30-2, 10 KOs) and will take place at the Sparkassen-Arena in Kiel, Schleswig-Holstein, Germany. 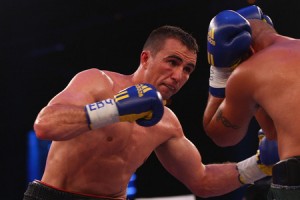 Gutknecht comes into this bout with only one loss on record and ranked 10th in the world among light heavyweights.  The loss came in April of 2010 when Gutknecht faced Robert Stieglitz, who was making his second defense of his WBO super middleweight title.  Gutknecht lost by unanimous decision with scores of 108-119, 110-117 and 111-117.  Stieglitz went on to defend his title three more times and is currently ranked 4th in the world among super middleweights.

After the loss to Stieglitz, Gutknecht moved to the light heavyweight division and has won all five fights he’s taken.  In May of 2011, he took the EBU light heavyweight title from Danny McIntosh with an eighth round TKO.  He followed that up with UD wins over Lorenzo Di Giacamo and Vyacheslav Uzelkov.

Averlant will make the trip from France to take on his opponent in his home country of Germany.  Since 2010, Averlant has gone 7-2-1 with both losses coming by unanimous decision.  He has yet to face highly skilled competition in the ring, and hasn’t fared all that well against the opponents he has faced.  His toughest opponent to date has been Artur Hein, who is now 14-2.  Their first meeting in the ring was scored a draw, and then Averlant scored an eleventh round TKO in the rematch.  His others wins have come against opponents with very little professional experience or who have losing records.