I’ve long asserted that the Manny Pacquiao-Floyd Mayweather saga is not about either fighter fearing or ducking the other. Rather, the mega-bout isn’t happening because Bob Arum is deathly afraid of Pacquiao, or any of his fighters for that matter, catching a glimpse at how Mayweather adviser, Al Haymon, handles his clients. 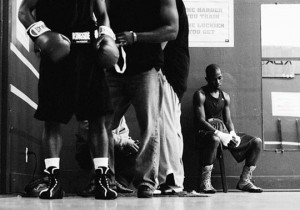 You see, Haymon may represent a lot of fighters, but he is not a boxing guy. He does business and constructs his deals as if his fighters were entertainers or athletes from other sports. As such, he is a very dangerous man to the status quo in boxing.

In boxing, the entire system is built to benefit the money men and power brokers. The fighters exist as interchangeable office furniture in the fistic Feng Shui.

In terms of money, things are definitely better for the fighters in this day and age, but it matters little if the overall business structure remains the same.

Boxers, despite doing all the heavy lifting, taking all the risks, and suffering all the physical repercussions for their efforts, are still paid as though receiving an allowance from daddy. They are doled out chunks of money, here and there, just to keep them happy and solvent enough to support whatever lifestyle they’ve become accustomed to.

You won’t see Lebron James paid his money on an “as needed basis” and you won’t ever hear of Tiger Woods having to ask a third party for an advance on his next tournament pay. These guys get paid their worth and get paid like actual workers.

Boxers, on the other hand, are perpetually kept thirsty for the teet of the money men, dependent upon the next pay check. A fighter who makes a $1 million payday won’t ever see that $1 million. Likely, by the time the million dollar fight rolls around, he’ll be broke again and have to ask for an advance on his next fight.

The promoter will happily oblige, of course, knowing full well that whatever money being doled out in the moment, will be paid back with interest from the fighter’s funds later. These random, small advances keep the fighter’s finances swirling in perpetual chaos and untraceable, but ultimately legal, graft.

Unfortunately, most boxers have no idea how to handle this kind of money, much less how to navigate the kinds of business deals they’ve found themselves thrust into. Many times, nobody is watching their money. And, if there is someone in charge of their finances, it’s likely to be someone “recommended” to them by the promoter, someone incapable of the job, or a “trusted” associate more then willing to compromise the fighter’s well-being for the sake of their own bottom line. Any way you slice it, the fighter is going to come out on the short end.

Let’s not even begin to delve into the countless examples of main stage fighters who have retired from the sport, only to find themselves completely broke or actually in debt to their promoter or manager. It’s appalling that, in the one sport most in need of post-career care, the athletes find themselves with the rawest of deals. With broken bodies and often impaired mental faculties from punishment taken, those who fought for the amusement of fans and the profit of power brokers, are thrown out into the world with nothing but their name. It’s not always a matter of a wide-eyed fighter blowing his money on extravagances– It’s a matter of a game that is fundamentally rigged.

In the boxing world, fans and media alike, are divided about the subject of fair compensation. Some side with the fighter and in favor of a boxer’s self-determination as a business entity. Others take the side of management and hold firm on the old school business structure.

Never did this division become more apparent than with the Yuriorkis Gamboa-Brandon Rios debacle from a few weeks back.

Gamboa, the featherweight kingpin, had been marketed as an April 14 opponent for lightweight, Brandon Rios, over the course of a couple of months before his no-show at two press conferences proved otherwise.

The Cuban Olympic gold medalist would later go on record as saying that he had never signed a contract, was never in agreement with the terms, and had no intention of fighting Rios under the current conditions. Gamboa was allegedly set to make $1.1 million for the Rios bout, more than double any previous payday. But, still, it’s the fighter’s ultimate say as to who he wants to fight, right?

In boxing, two money men, with little more than a handshake agreement, force their “boys” to have at one another for the amusement of fans and the benefit of their own bank accounts. Written contracts are thrown into the mix at the last minute and only because the commissions require them. While the fighters could balk at their arrangements, they seldom do because, well, this is their livelihood and they are likely in need of a cash injection in order to maintain their lifestyle.

The solution to prevent these handshake deals from falling apart would appear to be a restructuring of the boxing business model and a dedicated effort to do business like an actual sport, with real contracts and professional protocol. Or they could simply squash the “trouble makers” and discredit those uppity interlopers who put these crazy ideas of fair pay and legal recourse into the heads of the fighters.

Top Rank, promoter to both Gamboa and Rios, decided on the latter and has filed a lawsuit for breach of contract against Gamboa. The promotional firm, headed by Bob Arum, asserts that they had a binding verbal contract with Gamboa and that the fighter even took a $70,000 advance on the fight.

Right or wrong, win or lose, Gamboa will be punished. The 30-year-old fighter will likely be sitting out a good chunk of his prime athletic career while dealing with this. Don’t expect the promotional firm to go easy on their runaway indentured servant. Unless he gives in and promises to make things right, Gamboa is in for a public flogging by Top Rank, the public, and maybe even the TV network set to air the fight.

“I think it’s absolutely imperative that HBO takes as hard a stance as possible against such action…be punitive as can be,” Max Boxing’s Steve Kim wrote in a long, impassioned diatribe on the issue. “Deal with it harshly and boxers and their handlers will think twice about pulling such stunts. Allow Gamboa to skate off easily and you just might green-light more of this behavior.”

Of course, this is the same Steve Kim who, days later, regaled readers with stories of hobnobbing and sightseeing with Top Rank brass on a Puerto Rican excursion to the Juanma Lopez-Salido II bout. So, take the impassioned defense of Top Rank business interests with a grain of salt. But, still, this seems to be the prevalent attitude when it comes to a fighter exercising even the most modest amounts of self-determination and self-interest.

In the real market place, there’s no such thing as being overpaid. The market determines the pay and if the money’s there, it’s because the worker is worth it.  Not in boxing, though.

In the current world of professional prize fighting, people will insist that fighters make too much money and  have too much control over their own careers. What would be rejected by fans and media in their own workplace, is considered virtuous and correct in boxing. More so than in any other sport, there seems to a willingness to deal with these fighters as objects instead of actual professionals.

Most of that comes directly from the sport’s power brokers who pump out massive amounts of publicity and almost completely own the boxing media. The rest comes from those who profess to love the sport, but too often regard its dark side as quaint or are resigned to accept the corruption as an intrinsically inseparable part of the game.

The days of tough luck, hard-drinking palookas who talked like characters from Mickey Spillane novels are long gone and no matter how much boxing nerds wish for them back, they aren’t returning. And while the Golden Age of boxing proved to be fertile ground for the wet dreams of those who obsessively thumb through old Ring Magazines, those weren’t great times for the fighters, who worked for slave wages, put in long hours and, with just a handful of exceptions, never had a taste of the wealth they were generating.

These days, things have moved forward somewhat in terms of pay and self-determination, but then something comes along to remind us that they haven’t really gotten all that much better.