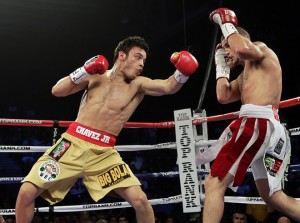 Chavez Jr., The Boxing Tribune’s third ranked middleweight in the world, is coming off a unanimous decision victory over Marco Antonio Rubio in February. The second generation star won his title  in 2011 from Sebastian Zbik amid controversy following the WBC’s stripping of lineal champ, Sergio Martinez weeks prior. Since the unanimous decision over Zbik, Chavez has defended the belt twice– stopping Peter Manfredo Jr. in five rounds and then taking the decision over Rubio.

Slowly earning respect and recognition, Chavez has developed nicely under the guidance of trainer, Freddie Roach, but will be taking a considerable step up in competition against Lee.

Andy Lee, trained by Emanuel Steward, is ranked twelfth in the world by The Boxing Tribune and is coming into the Chavez bout following a string of solid victories. Since March of 2011, Lee has scored victories over Craig McEwan (TKO 10), Alex Bunema (UD 10), Brian Vera (UD 10), and Saul Duran (TKO 2). Lee’s lone career setback was against Brian Vera, who stopped Lee in seven rounds back in 2008.

Lou DiBella, who promotes both Lee and Sergio Martinez, is also confident that a deal can be reached for the winner of the June 16 contest to face Martinez, the undisputed top middleweight in the world, later in the year.