This Saturday night in the Netherlands, American Demarcus Corley continues his stuttering career when he contests a “world title” fight with Dominican Republic native Luis Ernesto Jose. The fight takes place in the boxing backwater of St Maarten, perhaps in keeping with it’s world title classification – it’s sanctioned by the IBO and something called the UBC, which appears to be a couple of guys picking up sanctioning fees from a back-bedroom somewhere in Kansas. 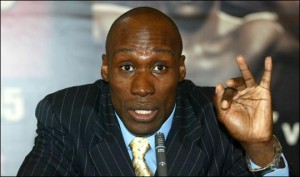 Corley, a WBO light-welter titleist a decade ago, has gone 2-8 in his last ten fights, and at 37 his best days are clearly behind him. That said, he comes off a ten round points victory over previously unbeaten Gabriel Bracero, after which he picked up the NABF 140 pound belt, so he still retains a certain relevance.

The 36 year old Luis Ernesto Jose has earned his world title shot having been stopped early in three of his last four contests, and his 30-8, 25 KO record features a string of wins over novice opposition, punctuated by the odd excursion with quality fighters against whom Jose invariably suffers a beating. In March 2009, Lucas Matthysse saw him off in 2 rounds, which seems a more accurate indication of Jose’s quality than any of his victories.

For all the lunacy of the bout’s world title classification, Corley insists he’s about to pick up a belt and that he remains at the top table at 140 pounds and even 135, but he’s fooling nobody:

“The only thing on my mind is winning this UBC title at 140 and then I’m going down to 135 and making a campaign there. I want to fight Antonio DeMarco. He has the WBC title at 135. And if I can’t get him then I’ll stay at 140. My vision and my goal is to win the WBC title. And I plan on having it before this year is out”, he said.