On a slow news week, let’s give something new a try. I’ve had a Big, Fake Mailbag with bogus emails in the past and I know I’ve made fun of the whole concept, but what the hell. Here’s the first (and possibly last) Paul’s Bulging Mail Sack segment:

Clinching is illegal in boxing. So, when Carlos Molina clinched, everyone complained. But Devon Alexander clinched Maidana more than Molina clinched Kirkland. Hopkins, Berto, and Ward clinch way too much. That’s part of their game plan, but no one complains. Whats the deal? 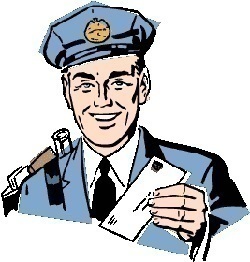 I got a few emails about clinching, so I decided to just post this one and address all things related to the issue.

From hearing some media-types talk, you’d think that clinching was something new, perhaps invented by Andre Berto in 2009 during a villainous “Boxing Must Die” boardroom meeting with Al Haymon, Ross Greenburg, and the Illuminati.

Clinching has always been part of the sport and will always be around. The problem isn’t that one guy is grabbing and it isn’t that the ref isn’t enforcing the rules. The problem is that the fighter being clinched has no idea how to deal with it. In today’s game, clinching has become the ultimate neutralizer because the other guy has no clue as to what to do.

Clinching, in and of itself, is not a mood killer. The first round of Rocky Marciano-Archie Moore I had 19 clinches and not a single referee warning, but it was still a hell of an entertaining round. So, the issue isn’t the grab-ass, nor is it the referee. The problem is with the fighter who has no idea how to prevent a clinch and then waits patiently for referee assistance while tied up.

A ref won’t enforce any non-clinching rule when one guy is passively receiving the warm embrace of his opponent. It’s just not going to happen and, believe me, the Pandora’s Box of referee grandstanding and in-ring activism is not one that we want to open.

For those who want to see a textbook example of how to avoid the clinch, check out the Sugar Ray Robinson-Jake LaMotta series. Robinson used movement, timing, a sharp jab, and when all else failed, a push, to stop Lamotta from tying him up.

For those who want to rail on the clinch, point the finger at the clinchee, not the clincher or the officials.

As for Carlos Molina, I guess people would’ve preferred for him to get plastered and knocked out. He was outgunned and used his smarts to come up with the best game plan possible. Let’s face it, Molina was signed as an opponent, just good enough to put up a valiant losing effort.  The fact that he flipped the script was entertaining despite the clinches. He played on Kirkland’s woeful lack of skill and was successful at his strategy. It wasn’t a dull fight and, really, it was the only way Molina could get the win.

Maybe he got ripped because he’s a Mexican fighter and Mexicans are supposed to walk face-first into punches. More likely, though, his effort got marginalized because clinching has become a cause célèbre among some in the media who want to generate cheap publicity for themselves.

But I don’t see Molina taking more crap than guys like Berto, Ward, or Alexander. From what I see, the African American fighters get extra special focus. And Andre Berto, geez, from the way some talk, you’d think his sole purpose in boxing was to destroy the sport.

Not sure what to ask first but, let’s go in this order. This is a two part question for you.
First, do you think PAC was overly exposed by JMM in their last fight, that they (Team Pacquiao) had a hard second thought about facing PBF?

I would also like to get your opinion about PBF vs Cotto. IMO, PBF can do whatever he want’s in this fight. What I mean is, he can play safe and take it to 12 or he can knock out Cotto in 8 if he so chooses to do so. Your opinion please.

If you ask me, Marquez didn’t expose anything. I always asserted that footwork and good counter-punching would make Pacquiao look downright regular. I’m no genius, alone in a cocoon of brilliance, so Freddie Roach and Bob Arum had to know this as well. The last JMM fight merely confirmed this for them.

I had picked Manny to win early because I assumed Marquez would have to open up and attack, knowing that he’d never win a decision. But he decided to just be himself and count on the honesty of the judges…ahem.

That’s PART of the hold-up with Manny-Floyd. The other part has to do with business and Arum losing his death-grip on Manny.

Let’s say they make this fight and Manny sees Floyd get his $40 million check with all streams of revenue accounted for and clearly highlighted while Manny looks at his $8 million promissory note littered with IOUs and vague back-ends. If Manny has a quarter of a brain, this would raise a real red flag.

Arum isn’t going to risk a loss for Manny or risk losing him as a client because this is the sweetest deal Arum could ever imagine. He’s got a guy who’s generating tremendous income and is completely and willfully ignorant about where his money is coming from and what’s happening to it.

As for Mayweather-Cotto, I’m in the minority because I feel that Cotto will be a lot more effective than some people think. Psychologically, he’ll be more comfortable since he’ll finally be the aggressor. Cotto is clueless and helpless when pursued, but is a lot better when he can come forward. I still think that Cotto is a shot fighter and has been ever since the first Margarito fight, but we won’t see too much of that against Floyd. Mayweather frustrates and perplexes, he doesn’t break you down physically.

I just think that Mayweather is much better and would’ve beaten Cotto at any stage of their careers. I’d be surprised if Mayweather goes for the KO after he takes a good shot from Cotto, so I’m expecting a solid decision on the run.

PS. That’s OK, I don’t mind being hated…As a matter of fact, I take pride in being hated by the right people.

“HBO’s Trip Down The Hersh-y Highway”

What do you think about the new regime at HBO and Showtime? Things look bleaker than ever.

I don’t know about “bleaker.” I think they look about the same as always.

So far, Ken Hershman’s reign at HBO hasn’t been all that different than Ross Greenburg’s. There haven’t been any real changes yet or improved matchmaking protocol. The only real difference is that we’re not hearing all the hand-wringing and gnashing of teeth about Ross Greenburg’s evil ways.

If you ask me, Showtime has benefited in the change of guard at HBO. They were able to nab Berto-Ortiz II and a couple of other fights that would normally have been HBO property. But it’s still early in the Hershman era, so we’ll have to wait before passing real judgment.

If anyone is under the assumption that the massive fall in HBO Boxing viewership over the last 10-12 years has to do solely with Ross Greenburg’s leadership, they are just delusional. Greenburg came in just as the last of boxing’s network TV fighters were finishing their careers. Essentially, he inherited a bum product that had succeeded in isolating itself from the mainstream. Nothing and nobody could’ve prevented the ratings decline.

What we’re seeing is the effect of boxing losing access to network TV. The shrinking fan base will be a fact of life until boxing finds its way back to free TV. Where there were 7 million viewers willing to watch HBO Boxing more than a decade ago, expect there to be just 1 to 1.5 million willing to watch it now. And it doesn’t matter whether it’s Andre Berto, Devon Alexander, Paul Williams, Julio Cesar Chavez Jr., or Sergio Martinez. The numbers and ratings have been consistently similar for all of HBO’s telecasts. New stars aren’t being born because fans are simply not being exposed to them.