Excuse me while I abandon all pretense of professional objectivity and just stare slack-jawed at my computer screen like “what the sam hell? Are you friggin’ kidding me?!” Steve Forbes (35-10, 11 KOs), ten months removed from getting absolutely clobbered on FNF last year by Karim Mayfield, faces the ageless, timeless, and frequently beaten senseless Emanuel Augustus (38-34-6, 20 KOs) in a battle of guys whose careers were over a long time ago yet somehow continue to convince commissions to let them fight. 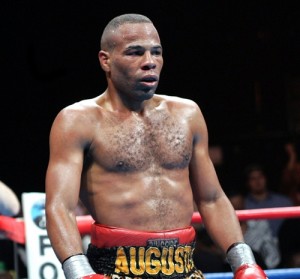 Let’s get the nuts and bolts out of the way first. Forbes is 3-7 in his last ten fights, just endured his first career stoppage in a fight in which he looked absolutely lost. Recapping the fight for this very site, I said of Forbes, “…it behooves the viewer to ask how someone who was a champion at 130 pounds could be so out of shape that he could not make the welterweight limit, and furthermore only had the weight of a quarter-pound burger available to lose when he stepped on the scale over the contracted weight. Usually a fighter waits until after he retires to put on the padding. Forbes might have just been getting a bit of a head start, since retirement surely awaits him now.”

Well, shows what I know. Say a fighter ought to retire and, provided his brains have not been completely turned to pudding a la Muhammad Ali, he won’t pay the thought any mind at all. Which is just as good a description of Forbes’ opponent Thursday night; Emanuel Augustus has lost five fights in a row, two by knockout, including a sadistic beating at the hands of Ruslan Provodnikov on FNF in 2010 and a one-sided decision loss to Vernon Paris in his last fight over a year ago. Augustus hasn’t won a fight against a genuine opponent since he beat Courtney Burton in 2006; you have to go all the way back to 1994 to find his pro debut.

The combined age of the two men in this fight is 72; Augustus is 37, Forbes is 35. While that is hardly the worst combined age in the sport (Denis Lebedev vs. just about anyone he’s fought recently tops the 72 mark, and the heavyweight division frequently seems to feature contests pushing 90 for the combined ages of the fighters these days), calling Augustus 37 and Forbes 35 is a bit like saying you have a 2006 Ford that, oh by the way, just happens to have 350,000 miles on it.

All of the above is all well and good. Someone has to win and nobody has to care. Neither fighter stands to gain anything more than a paycheck from the proceedings, since the junior welterweight division in which these two men compete is so thoroughly loaded that neither guy even cracks Boxrec’s top 100 worldwide (Forbes is #129, Augustus is unranked due to inactivity but his “score” after his last fight would put him 160th if he were considered active).

Which in turn leads me (and should lead you, the reader) to ask “why?” Why did the California commission allow this fight to go on when Forbes might have and Augustus definitely has serious risk of major neurological damage? Anyone who’s seen any of Emanuel Augustus’ last five fights, especially that brutalization that Provodnikov dropped on him two years ago, knows that Emanuel Augustus should only be allowed in the same building as a boxing ring if he bought a ticket to watch the event in the stands.

Furthermore, why are fans paying actual money to watch these two guys fight? This fight is the main event at a minor card at the Orange County Fairgrounds in Costa Mesa, California. The fight is being billed by the promoter as a battle between former world champions (although Forbes was a legit titlist once upon a time, calling Augustus a champion is giving the IBA a lot more credit than it deserves as a “world title”, but never mind that.) According to Wikipedia that venue seats 8,500 people. While nobody seriously expects this to sell out, the fact remains that in theory almost nine thousand spectators (counting temporary seating and ringside seats and what-have-you) could pay good money to watch two men who should be far away from the ring potentially punching each other to death.

There exists a very fine line between Sweet Science and sanctioned manslaughter. If the referee’s job is, at least in part, to ensure the safety of the fighters, then shouldn’t the referee stop the fight in less time than it takes to say “protect yourselves at all times, I want a good clean fight”? If the purpose of a boxing commission is to prevent manslaughter in a boxing ring (and that IS why states regulate boxing and MMA, isn’t it? At least in theory that’s the stated mission of just about every member commission in the ABC even if the real reason—Texas, I’m looking at you—is to collect a few bucks’ from boxing promoters), then why is this fight allowed to go on?

Furthermore, do the Orange County Fairgrounds and the City of Costa Mesa really want to be associated with a farce like this? A protest won’t do anything other than scare away legitimate fighters, but someone ought to be writing angry letters or forwarding this column to whatever city newspaper Costa Mesa has and letting people know that such absurdity is being allowed within their city’s limits. You’re better than that, Costa Mesa.

Now mind you, I’m no fan of the “boxing is dying” meme (I made that point very clear in my Southpaw column a couple weeks back), but stuff like this is truly killing the sport. If Steve Forbes kills Emanuel Augustus on Thursday, or vice versa (and either result is perfectly plausible given the brain damage that both men and especially Augustus have sustained during their long careers), and the spectators in attendance and the local journalists and The Boxing Tribune and Dan Rafael at ESPN point this out, then someone is bound to point out that boxing commissions aren’t doing their jobs and fans aren’t going to want to pay to potentially see a man who is a far cry from his once-great self get hurt (again, either combatant qualifies here.)

This fight has no reason to happen. I’d rather see these guys paid NOT to fight than see them paid to fight. This is disgraceful, disgusting, a black mark on the sport, a very real threat to invoke government intervention (this being an election year and all) should something awful happen in there, and there is absolutely no upside. Neither man has the skill, the power, or the ability to create a real highlight reel moment (contrast the likely one-sided beating Albert Mensah is about to take on ESPN2 Friday night at the hands of Michael Katsidis, a knockout that could make SportsCenter if Mensah is foolish enough to engage his opponent).

When I sat down to write this, I was going to crack jokes. The title was as far as I got. Sometimes a writer has to take a stand and speak out against the idiocy that seems a constant companion to the boxing fan, and this is one of those times. The California state commission needs its house cleaned, its patronage plums fired, its venues committed to the safety of the fighters and the integrity of the sport. Steve Forbes should not be fighting Emanuel Augustus. Neither of those guys should be fighting a sack of potatoes at this point, much less a (mostly, for now) live human being punching back. Boxing fans are advised to stay far, far away from this fight card. Don’t give them your money.

Fox Doucette covers Friday Night Fights for The Boxing Tribune. His weekly column, The Southpaw, appears on Thursdays. He’s perfectly willing to move to California and run the commission himself with a little help from the Tribune’s own Tim Harrison if that’s what it takes. Fan mail, hate mail, and tales of gross negligence by commissions in the past can be sent to beatcap@gmail.com.