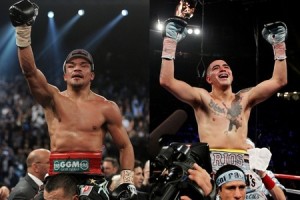 There really should have been no suspense waiting for the scorecard after the twelfth round. Abril wasn’t going to get the decision in a fight like this. The hardest foe to beat is a house fighter with big money bouts on the horizon– and the 25-year old Rios has a world of money fights ahead of him, notably a proposed bout with Juan Manuel Marquez at Cowboys Stadium in July.

The only way for the outsider to take the bout under these circumstances is via knockout. That’s just
boxing–a sport where the event promoter foots the bill for the officials, pretty much ensuring that a Cinderella story rarely happens at the expense of the money fighter.

Really, though, this particular contest couldn’t have been better scripted. Rios moves ahead to a big money bout, with the controversy of a gift decision soon forgotten in the mania of a Marquez-Rios showdown. Abril gets cheated, but wins copious amounts of street cred for his performance and will likely stick around for a crack at the still-vacant WBA lightweight title.

Abril got the biggest payday of his career, a sweet bonus for Rios failing to make weight, and big fight exposure. But if he thought that he’d spoil his way to a win over a fighter with millions on the table, he had to be delusional.

The lanky Cuban boxed competently and did a good job of nullifying a hard-charging Rios with smart movement and an awkward, all arms defense up close.

Rios did his part and came forward all night, but could never get a sustained offensive push going. He didn’t look drained from his well-publicized struggle to make the lightweight limit the day before, he just looked confused and thrown off rhythm.

Abril, to his credit, kept his poise and maintained his game plan throughout the full twelve rounds and, in a perfect world, should’ve won the decision.

However, the boxing world isn’t perfect and he had to settle for a split decision loss which saw Adalaide Byrd score the fight 117-111 in his favor with Jerry Roth scoring a completely different bout, 116-112 for Rios. The third judge, Glenn Trowbridge, had Rios winning by a score of 115-113. For the record, The Boxing Tribune saw the fight 115-113 in favor of Abril.

What does a counter puncher do against a tricky, awkward opponent with low punch output? In this case, the counter puncher does enough to win at least ten of the twelve rounds, scoring what he can and working at his own pace.

After taking the first two rounds off to figure out his opponent, Marquez settled into a groove and did enough to solidly win the next ten rounds. The Mexico City native, fighting for the first time in his hometown since 1994, made an effort to put away a tiring Fedchenko in the twelfth and final round, but was unable to find the sweet spot against an opponent fighting to survive.

At the end of twelve, The Boxing Tribune agreed with two of the judges, scoring the contest 118-110 in favor of Marquez.

Marquez walked away with the interim WBO junior welterweight title, which cost him about $15,000 in sanctioning fees.

From the opening bell, Denver’s Alvarado jumped on Herrera, forcing an inside fight against the lighter-hitting boxer. Herrera battled back, but lacked the firepower to hurt or even earn the respect of his opponent.

As early as the second half of the first round, Herrera began showing signs of facial damage from Alvarado’s heavy shots and by the eighth round, his left eye was almost completely closed. Alvarado was also alightly banged up, sporting a small cut on the outside corner of his right eye, sustained in the middle rounds.

Ultimately, though, Herrera was fighting on the retreat all night and Alvarado was right in his comfort zone, taking a solid decision over an opponent one notch below world class.

In the opening bout of the pay-per-view telecast, fught at the junior welterweight limit, Filipino prospect, Mercito Gesta (25-0-1, 13 KOs) scored a TKO 8 victory over Colombian journeyman, Oscar Cuero (15-8, 12 KOs). Cuero was down in both the seventh and eighth rounds.

In off-TV results from Mexico City, Saul Roman (35-9, 29 KOs) won a majority decision over Richard Gutierrez (26-9-1, 16 KOs) in a battle of journeyman junior middleweights. Gutierrez has now lost his last five fights in a row.