Boxing has been hit by two controversies, three weeks apart. Both speak to the same issues and spotlight the same questionable areas of the sport– From the quality of the judging/officiating to the overall aptitude of the fighters.

On March 24, Carlos Molina tied up and confused James Kirkland, seemingly en route to a solid points victory. However, a confused Molina corner man would get his guy disqualified for entering the ring before the tenth round’s official end. Referee Jon Scorle could’ve looked the other way, especially considering the confusion that sprang up after Molina was knocked down at the end of the tenth, but he didn’t. 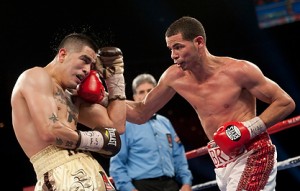 Then, just this last Saturday, Richard Abril soundly handled a befuddled Brandon Rios and seemed on his way to a major upset until the judges’ scorecards were read. Abril would have to settle for a split decision loss and whatever street cred that comes along with a sanctioned robbery.

In both cases, the money fighter was headed for bigger and better things while the underdog was signed to be little more than a credible victim. Molina and Abril weren’t meant to win and weren’t signed to win. Both were expected to be just competitive enough to make the star look impressive.

Prospect vs. patsy matches are part of the sport and have been around since the very beginning. But these days the patsy, if he can box a little and think on his feet, can absolutely shut down many of the prospects. Therein lies the problem with these modern day set-up bouts. It seems that the game has passed the players.

Rios’ absolute inability to adapt to Abril’s slight change of angle and a raised glove was disturbing, especially for a fighter ranked among the elite of his division. The same could be said for Kirkland, who looked like an elephant trapped in a net for much of his bout with Molina.

In the case of both Rios and Kirkland, their only strategy was to “do more” of what they usually do. And of the two fighters, only Kirkland would really keep pushing forward. Rios, despite his bravado and thug image, fell into quiet resignation for good portions of the bout. Maybe he knew that all he had to do was keep churning fists and he’d get the win, regardless of whether most of his shots were smacking glove leather.

The post-fight criticism aimed at both Abril and Rios was really perplexing. Yes, both held and played the role of spoilers, but would it be fair to expect Abril or Molina to just stand there, chin out, and wait to be shellacked by the house fighter? Matched to the strengths of Rios and Kirkland, neither Abril nor Molina stood a chance. Can you really blame them for looking for a back door to the win?

The critics seem to be cheering for the set-up over the actual fight. Abril and Molina were supposed to be destroyed in spectacular fashion. Goddamn them for not going along with the script.

Maybe if the money fighters had been matched in bouts designed to be truly competitive, these things wouldn’t have happened. Maybe picking challengers from the periphery of contention breeds this kind of spoiler mindset in opponents. Could it be that an over-matched opponent in the biggest fight of his career might happily sacrifice entertainment value for the big win?

Of course, neither house fighter went away with a loss despite being beat solidly. That’s just how boxing works. Or doesn’t work.