The tendency among boxing fans is to dwell on the sport’s dream fights, but there is certainly a case to be made for addition by subtraction in the sport we love.

So, in my one-man quest to save boxing and inspired by the U.S. government subsidies paid to farmers for not growing certain crops, here’s a look at some upcoming fights that would’ve been better left unmade: 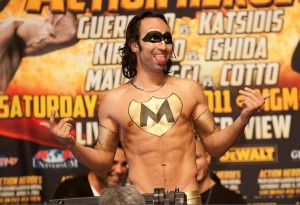 I guess it’s only appropriate that Senchenko’s meaningless WBA “world” title be defended against an absolutely undeserving challenger. What’s sad is that Malignaggi is by far the best opponent Senchenko has ever faced, despite the Ukraine fighter’s three title defenses and status as WBA darling since 2007.

This will be a Twilight Zone welterweight title bout, held in an alternate universe where, apparently, planes carrying Manny Pacquiao, Floyd Mayweather, Victor Ortiz, Andre Berto, Mike Jones, and Kell Brook all crash into one another, leaving behind a barren welterweight wasteland with second and third tier guys, like Senchenko and Malignaggi, left to pick up the pieces.

It’s not that Senchenko-Malignaggi is a bad match-up, it’s just that it’s all rather pointless. If Senchenko wins, he keeps the title in the Ukraine, defending against Footlocker assistant managers and high school gym teachers. If Malignaggi wins, he brings the title back home and will immediately cash the belt in for one more payday against a much better fighter.

Senchenko’s promoter, Union Boxing Promotion, paid $1,000,100 for the right to stage this bout. I say we give them their money back and just move on.

Dmitry Pirog vs. Nobuhiro Ishida (May 1)

When Pirog starched Daniel Jacobs to win the WBO middleweight title in 2010, it looked as though we had found a hidden gem. The Russian looked like a tough European pug with an American style and legitimately heavy hands. And that’s still the case. However, Pirog has been enjoying the WBO’s hospitality since winning the title and seems to be content with the warmth of the organization’s loving embrace.

Back in the 80’s and 90’s the WBO was slow to gain acceptance because of some very questionable rankings protocol that seemed as though they were actively protecting their champions rather than looking for real challenges. Recently, the organization has fallen back into their old habits.

Nobuhiro Ishida is getting the next crack at Pirog, despite only two real middleweight wins. The lanky, light-hitting Japanese fighter shocked the world with a first round TKO of unranked James Kirkland in 2011 at 158 lbs. and then beat novice, Edson Espinoza (who was making his professional debut!) by first round TKO seven months later.

Apparently, Ishida’s one-sided, lackluster loss to Paul Williams in February sealed the deal as far as being a potential world title challenger– Pirog had to have him! The client-minded WBO saw fit to make him their 11th ranked challenger and immediately green light a title fight.

If Pirog hadn’t already defended against no-hopers Javier Francisco Maciel and Gennady Martirosyan, the Ishida bout wouldn’t be so offensive. But, for crissake, you could throw a dart at the middleweight Top 30 and find a better, more deserving opponent than Ishida.

Chris John vs. Shoji Kimura (May 5)

John has been world champ since 2003, but has only fought, maybe, four or five real challenges since he won the title. It appeared that he was coming out of his shell in 2009, but a run-in with some horrible Texas judging in his first Rocky Juarez bout chased him back to the comfort of Indonesian home cooking.

Japan’s Shoji Kimura is next on John’s list of hapless, hopeless challengers. He has lost two of his last three, but somehow got the WBA’s approval to challenge for their “super” featherweight title.

We might have to buy off a dozen Shoji Kimura-type bouts before we get to a real challenge for John.

Who could forget the classic first Bundrage-Spinks war, right? Well, in case you didn’t see it, the 2010 fight went like this: a clumsy Bundrage pinned dead-legged IBF 154 lb. titlist, Spinks against the ropes and punched him until Spinks couldn’t take it anymore. Scintillating.

Now, thanks to stupid IBF politics and Don King’s greasy touch, Bundrage-Spinks II is going to happen whether you like it our not.

In a junior middleweight division that’s starting to legitimately heat up, one of the four recognized world champs, who has only fought once since winning the title in August of 2010, is wasting his time on an utterly pointless fight.

Admittedly, Bundrage is a clumsy fighter who is often more entertaining outside the ring, but with names like Kirkland, Alvarez, and Angulo in the division, “K9” could be put to much better use.

For three or four years we were told that “The Filipino Flash” was a pound-for-pound great. As a matter if fact, it was crammed down our throats that he was the next big, great, awesome, legendary thing.

Then, when the kid finally beats an elite-class fighter in Fernando Montiel and starts justifying his lofty press clippings, he falls back into his old habits of fighting older/lesser, naturally smaller prey and only looking marginally impressive against them.

Since the Montiel fight, Donaire has fought super flyweight Omar Narvaez and a rebounding Wilfredo Vazquez Jr. in back-to-back sub-par performances. It wasn’t that Donaire looked bad or was ever in danger of losing, it’s just that a lot is expected of a fighter  listed among the top 4 or 5  in the world and compared to names such as Roy Jones Jr.

In a weight span full of talent (118-122 lbs.), Donaire hasn’t fought any of the top names and doesn’t appear to be even entertaining the idea.

Cristian Mijares will be challenging for Donaire’s WBO jr. featherweight title, but is really two divisions above his ideal weight. The 30-year-old Mexican has only been effective at super flyweight and has suffered five of six career losses when venturing above his 115 lb. comfort zone.

On a lazy Sunday, I went online and decided to check out Saturday night’s Jon Jones-Rashad Evans main event from UFC 145. I’ve explored MMA from time to time, giving it ample opportunity to win me over, but never really found enough to hold my interest. Plus, I find the constant carnival barking of the UFC broadcast team annoying and more than a little insulting to my modest level of intelligence.

What I saw in Jones-Evans was basically a subpar, sluggish cruiserweight boxing match where, literally, nothing happened for the first third of the fight and, really, not much happened after that first exchange, either.

It’s amazing that in a sport where the athletes can use feet, knees, shoulders, elbows, and punch each other with 6 oz. gloves, so little action can actually take place. I’ve consistently seen more real fighting on 4-round Mexican undercards than on big ticket UFC bouts.

Yet, this just goes to show you the importance of marketing and salesmanship in sports. If a boxing pay-per-view main event featured four rounds of no action whatsoever and, over the full twelve, only delivered a combined 170 blows, the announce crew would be going ape shit. The fans would be ready to lynch.

The UFC announcers, on the other hand, were selling Jones-Evans as if it were a real war and, afterwards, sold the fight as if it had been a modern classic. Lots of salesmanship and infomercial bluster, more Billy Mays than Howard Cosell. Fans and media, feeding off the broadcast energy, followed suit with talk of “The Grudge Match” and the “bitter feud that came to a head.”

A lot of the magic of the UFC has to do with marketing and sales. They know their market and know how to manipulate it. Boxing can learn a thing or two about selling themselves to the public, but let’s be grateful that at least boxing analysts and broadcasters don’t blatantly insult the fans’ intelligence with transparent pandering. Even if the UFC mantra is true and “boxing is dying,” at least some of us can hold on to our dignity while resting on our death beds.