According to El Paso, Texas mayor, John Cook, the cancellation of the Julio Chavez Jr.-Andy Lee middleweight title bout at the Sun Bowl had to do with Chavez Jr.’s current romantic relationship with the ex-wife of a slain Mexican cartel figure. 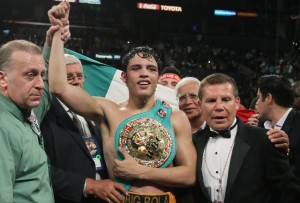 Edgar Guzman would be gunned down in 2008, outside of a mall in Chavez’s hometown of Culiacan, Sinaloa.

The University of Texas at El Paso’s (UTEP) decision to cancel the June 16 WBC middleweight contest, previously attributed to unspecified security issues, was more of a response to general security concerns over this relationship rather than a specific threat.

“It’s possible that Muñoz (who has a child from Edgar Guzman) is still connected in some way to “El Chapo” Guzman, but there’s no evidence of any credible or specific threat,” Cook affirmed.

Despite the setback, efforts are currently being made to keep the fight in El Paso.

“We’ll do whatever it takes to keep this event in El Paso,” Cook said. “The financial benefit of this event will be between $4-5 million.”

Since this article was posted, The University of Texas System chancellor, Francisco Cigarroa, announced that he would allow the Chavez Jr.-Lee bout at UTEP’s Sun Bowl, under the provision that “State, local and federal law enforcement can promise system officials they can handle any security measure. A security plan must be approved in advance by system officials and no alcohol can be served.”

Initial intelligence investigations reported that leaders of the warring Sinaloa and Juarez cartels were set on attending the card. That, combined with Chavez Jr.’s relationship with “El Chapo’s” ex-daughter-in-law, concerned Chancellor Cigarroa and forced the initial cancellation.

According to reports, the two cartels in question are considering the Sun Bowl as a “neutral zone” during the June 16 card.