The opening HBO TV bout this Saturday from Boardwalk Hall features a crossroads fight for two heavyweight contenders.  Before Chad Dawson and Bernard Hopkins engage in their bitter rematch, two college educated Americans will battle for the opportunity to be seen as this country’s next best shot at heavyweight glory. 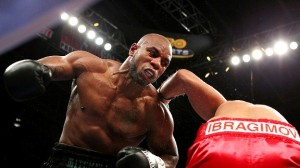 In boxing, the crossroads fights often come with expected roles for each fighter.  Michigan State graduate, Seth Mitchell 24-0 (18 KO) will represent the up and coming talent expected to showcase his skills against a talented veteran.  He is the heavy favorite expected to add a talented veteran scalp to his resume and experience level.

Saint Joseph’s University graduate, Chazz Witherspoon 30-2 (22 KO) will represent the veteran opponent role with a reasonable chance of winning.  The heavy underdog will be expected to give Mitchell his best challenge thus far, but eventually succumb to the young contender’s strengths and take his loss by knockout or decision.

Each man has their roles, but each fighter also has a big opportunity to advance their career.  For Mitchell, a win over the talented Witherspoon, whose only losses came against heavyweight contenders Chris Arreola and Tony Thompson, would announce that he is certainly a contender in the modern heavyweight division.  Witherspoon has the chance to show that he can hang with the best in the sport and deserves another run at the top.

Both fighters got late starts to their boxing careers.  Mitchell was a star football player at Michigan State.  He ended up in boxing after several knee surgeries ended his days on the gridiron.  He began boxing in 2006 and turned pro in 2008 after a brief amateur career.

Mitchell had to learn on the job as most boxers begin as children, not in their early twenties.  But Mitchell has so far succeeded where so many other ex-football players have failed.  He has gotten better with each fight and topped it off with an impressive second round knockout of Timur Ibragimov last December in his HBO debut.  He made a statement becoming the first to stop Ibragimov and he did it in impressive fashion.

Witherspoon, meanwhile, was not so successful in his HBO debut.  Like Mitchell, he got a late start in the sport. In his sophomore year of college, Witherspoon talked with his cousin and former Heavyweight Champion, Tim Witherspoon and decided to take up boxing.  He officially started his amateur career in 2002.  Following a very successful amateur career that included winning the 2004 National Golden Gloves title and being an alternate on the 2004 Athens Olympic team, Witherspoon turned pro.

Witherspoon turned pro with a great deal of attention despite the late start in boxing.  He was family to a former heavyweight champion and was part of the Olympic team.  Expectations were high to say the least.  He stormed out to twenty-three straight wins  in four years, setting up a showdown with fellow undefeated American Heavyweight, Chris Arreola on HBO.

For Witherspoon, it would be a night he would rather forget.  After an even start, Arreola took it to Witherspoon in the third and put him on the canvas twice.  Witherspoon would be disqualified at the end of the round when his corner jumped in before the official end of the round, very possibly to save their fighter from further punishment.

Witherspoon won three straight following the Arreola fight to get another chance at stepping up to better competition.  Again, he would come up short.  This time a ninth round TKO loss to veteran heavyweight contender Tony Thompson.  Witherspoon has won five in a row since the Thompson fight and is looking to get another crack at testing himself against the best in the division.

Any crossroads fight has questions for each fighter.  Mitchell is considered a strong puncher who can knock out most of the top heavyweight talent.  The question is whether he can handle the boxing skills Witherspoon will bring and, if the fight goes into the later rounds, how will he handle the deeper waters considering he has gone eight rounds only once.

Witherspoon comes in with a high boxing IQ, decent power, and the lessons learned from some tough losses to top competition.  In this fight, Witherspoon will have to show he has the mental toughness and the chin to handle the power and pressure from a top heavyweight.  Whichever fighter can overcome their question marks and capitalize on the other’s shortcomings will come out on top Saturday night.

Mitchell has the opportunity to continue his fast rise from football player to top American heavyweight.  Witherspoon has what may be a final opportunity to march towards his family legacy of being a heavyweight champion.  Both men have a great opportunity in front of them to rise to the top of the heavyweight division.

Mitchell and Witherspoon held a conference call last week to discuss the upcoming fight where they sounded like ready fighters but also displayed their educated backgrounds.  Witherspoon proudly discussed his academic scholarship to Saint Joe’s and how he would be a pharmaceuticals sales representative if he was not boxing.  Mitchell talked about his degree from Michigan State and said he would likely use his criminal justice degree towards mentoring young kids if not currently boxing.

Both men were very cordial to the other and respected each other’s background and boxing ability.  Of course both made it clear that the mutual respect will go only so far once the bell rings, as both men have something to accomplish this Saturday night and will look to do so at the other’s expense.