Long-reigning WBA featherweight world champ, Chris John (46-0-2, 22 KOs) is looking to make the 16th defense of his title this Saturday against Japan’s Shoji Kimura (24-4-2, 9 KOs) at the Marina Bay Sands in Singapore. 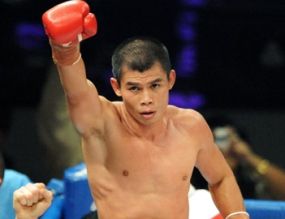 Indonesia’s John has been champ since winning the interim version of the title back in 2003 against Oscar Leon. Since then, the crafty 32-year-old veteran has made fifteen consecutive title defenses. Most of John’s defenses have come against soft opposition, although he has scored victories over Derrick Gainer and Rocky Juarez as well as a controversial unanimous decision win over Juan Manuel Marquez in 2006.

Kimura, however, looks to be one of the soft touches. Loser in two of his last three, the Yokohama, Japan native is a former Japanese junior featherweight champ, with a split decision win over Ryol Li Lee as his only win of note. This will be Kimura’s second bout outside of his native Japan.