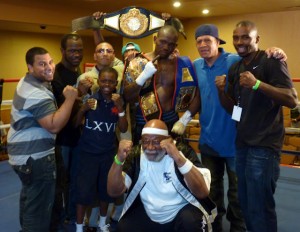 Dhafir Smith (26-22-7, 4 KO) came into the fight with over fifty pro fights to only fifteen for his opponent Tony Ferrante (12-4, 7 KO).  The gap in experience showed up.  Smith used his thudding jab and ring intelligence to control the action from every angle and take a decision by scores of 99-91, 97-93, and 98-92.  The Boxing Tribune had the fight 99-91 giving every round except the third to Smith.

Things started slow as each fighter tried to feel out the other and get an idea what they were looking to accomplish.  By round four Smith began establishing his jab and Ferrante simply did not have an answer.  The stick that was being shot out by Smith broke Ferrante’s rhythm at every turn and the younger fighter was never able to find a solution.

In round five Ferrante’s nose began to bleed from the repeated left hand down the middle.   The jab Smith prides himself on was controlling the distance and allowing Smith to operate where he is comfortable, from a distance opposed to in close where Ferrante wants to fight.  In round five Smith began opening up and letting his hands go.  He mixed in hard left hooks to the head and body along with plowing the straight right hand behind the jab.

Even when Ferrante was able to get inside and push Smith to the ropes the veteran experience still made it impossible for Ferrante to get an edge.  Ferrante would attack the body only to land on Smith’s arms.  The moment he was done punching Smith would let loose with short counter shots that took advantage of Ferrante’s aggressiveness.  Ferrante showed his heart by never giving up, but was unable to overcome the skill and experience of his opponent.  Smith was able to pick his opponent apart more and more as the fight progressed.

Despite the action being largely one sided it was an exciting fight.  Neither fighter had any issue with engaging the other and willingness to throw punches after the first round made for some lively action that heated up with the passing of each round.

At the final bell of the tenth round the scores were a formality.  With the win Smith picks up the Pennsylvania State Light Heavyweight title.  Smith, who can be his worst critic, was one of the few in the building not pleased with his performance as he felt he should have done more and put on a better show.  He discussed his jab being the key to getting the win.

”I wanted to put on a better show.”

“The jab, the jab was busting him and in the ninth round when I hurt him with that right hand.”

For Ferrante this was clearly the wrong matchup at the wrong time.  Coming off a tough loss in a brutal war to veteran Omar Sheika, he was faced with a near impossible assignment against another vet, except this one had a jab and superior ring IQ.  Ferrante is a tough fighter with plenty of heart and guts so he should bounce back.  Smith had positive things to say about an opponent he admits he did not take seriously prior to the fight.

For Smith he picks up a piece of hardware and continues marching forward in his eventual goal to get a crack at a world title.  Smith has pulled plenty of upsets in his career. His deceiving record is hardly an indicator of his talent.  He believes if he continues winning and improving he will at some point get a title shot from a champion who sees him as a tune up fight.

“Me and (trainer) Percy Custus going to make some noise in this division.  Keep winning and winning, somebody’s going to give me a shot a world title looking at all the experience I got, the guys I beat, going to give me a shot at the world title overseas or something like that.  I’m going to sneak up on them, just got to be ready.  Ain’t about records, about who the fighter is and I’m a good fighter.  You can’t judge me by my record.  You got to judge me by how I fight.”

Smith is a throwback fighter to another era as he showed tonight winning with classic skills.  He believes boxing begins and ends with the jab so he makes it his top priority.  Smith shakes his head at you when you ask him for his facebook or twitter page as he does not engage in these modern means of socialization.  Smith proudly describes himself as a throwback as he fights hard, fights often, and plans to fight his way to the top.

In the co-main event Victor Vasquez (15-6-1, 7 KO) turned in a solid performance coming back from a tough loss defeating Paul Fernandez (5-5-2, 3 KO) in a six round lightweight bout.  Vasquez and Fernandez had fought to a draw in a prior meeting in 2010.  Vasquez is now a very different fighter who has blended solid boxing technique with his natural willingness to brawl.

Vasquez stepped up in competition earlier this year and lost to Dorin Spivey in a bid for the NABA belt and a top ranking.  Vasquez was looking to get back in the win column and he did so with his typical aggression mixed with boxing skills he has developed over the last several training camps.  After a slow start in the first round Vasquez dropped Fernandez with a heavy left jab.  The second round was fought on even terms, but from that point forward Vasquez dominated the action.

In round three Vasquez began applying more pressure, forcing Fernandez to the ropes and letting loose with his body attack.  In round four it was clear the body punches were taking their toll on Fernandez who was slowing considerably.  In round five Vasquez was taking the fight to his opponent and dropped him for a second time with a straight right.  Fernandez looked dazed and finished, but managed to get to his feet and survive the round.  The sixth was more of the same as Vasquez had gained full control by this point.  Vasquez took the decision by scores of 60-52 on all three cards.

Vasquez was pleased with his performance demonstrating more than his ability to brawl and his improvement since the last fight with Fernandez.

“I had to show everybody I could box, not only brawl.  So I went in there and boxed.  I should have finished him but I dropped him twice, cut him.”

Vasquez displayed a considerable improvement in skills and patience in the fight.  He was willing to box and set a foundation before applying his pressure and heavy handed attack.  Vasquez credited being in good shape and said he will rest up tomorrow and then run  the popular ten mile Broad Street race on Sunday morning.

Taneal Goyco (4-3-1, 2 KO) and Brian Donahue (2-2-1) put on a show fighting to a majority draw in a four round light heavyweight bout. Both men are from Philadelphia and showed the toughness associated with Philly fighters as they came to throw punches and entertain the crowd.

The first two rounds were close, but Donahue seemed to have the advantage controlling the ring and landing the heavier punches.  Donahue tired in round three and Goyco was able to win the round often landing on Donahue, who can be too tough for his own good eating shots with his hands down.  In round four Donahue seemed winded until he was cut over the left eye from a head-butt.  Referee Sean Clark missed it and did not call a butt.  This lit a fire under Donahue who came on hard over the second half of the round landing tons of body shots.

The scores were 39-37 for Donahue and 38-38 twice.  The Boxing Tribune had it 39-37 for Donahue.  Both fighters seemed interested in an immediate rematch and it was a fight worth watching again.

In an entertaining heavyweight slugfest John Mercurio (5-0, 4 KO) stopped William Miranda (5-5-1) at 59 seconds of the fourth and final round.  Miranda applied the pressure and was the aggressor but Mercurio was the more accurate puncher timing his opponent as he rushed in. The fight was a rematch from April of last year that Mercurio won by unanimous decision.

Mercurio of Philadelphia hurt the Allentown, PA native Miranda in the third round.  Then Mercurio dropped Miranda with a right to the head in the fourth round.  Miranda rose but referee Benji Esteves called a halt in what felt like a premature stoppage.  Miranda was losing the fight but didn’t seem hurt and in need of being saved.

Alex Barbosa (2-0, 1 KO) won a majority decision over Jonathan Ocasio (0-8) in a four round featherweight bout by scores of 38-38, 40-36, and 39-37.  The first two rounds were competitive, but Barbosa took over in the last two rounds to take the decision on two scorecards.

Tyrone Crawley Jr. (2-0) of Philadelphia won a unanimous decision over Luis Antonio Lopez (2-11-1, 1 KO) of Union City, NJ in a four round junior welterweight bout by scores of 40-36 and 40-35 twice.  Crawley controlled the action throughout, but was unable to hurt Lopez until late in the fourth round.  Crawley could have stopped Lopez late in the final round but didn’t have the gas left in the tank to finish the job.  Still Crawley has good skills and will be worth watching as he moves forward.