The May 19 world title rematch between Lamont Peterson and Amir Khan has been officially canceled due to Peterson’s positive test for a banned substance during voluntary random drug testing conducted by the Voluntary Anti-Doping Association (VADA). 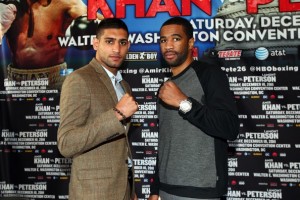 Earlier this week, it was announced that Peterson had tested positive for synthetic testosterone pellets.

Khan will return on June 30 against an opponent to be named.