Back in the 90’s the WBO was slow to receive recognition as a “real” sanctioning body– and that’s saying something in the often skeezy world of professional boxing. The reason for the snub was due to the sanctioning body’s perceived “friendly” matchmaking for their title holders. 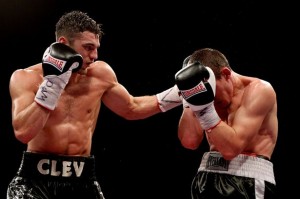 When it comes to sketchy matchmaking, a finger could be pointed at the WBC, WBA, and IBF as well, but the WBO was especially well-known for their ability to find unqualified top challengers for dodgy champions in every rec center, third-rate gym, and regional club circuit in the world. Throw in the shoddiest record keeping in the industry (They once ranked deceased super middleweight, Darrin Morris in their top 10–and even bumped him up in ranking twice, post mortem) and you get some especially rotten calls, even among the filthy four of boxing’s sanctioning bodies.

Over time, the Puerto Rico-based outfit cleaned up a bit, but lately they’ve been returning to form– with fellow sanctioning body, the WBA, not too far behind.

The recent debate about whether WBO 175 lb. champ, Cleverly should be forced to face mandatory challenger, Dmitry Sukhotsky or the preferred Robin Krasniqi was truly pointless and bordering on silly since both challengers are such easy, seemingly hand-chosen marks. Combined, the only noteworthy fight on either boxer’s resume was Sukhotsky’s unanimous decision loss to Juergen Braehmer in 2009.

For a “world” champ with three defenses under his belt, Cleverly has been stuck on neutral with recent bouts against pure club-level fighters like Tommy Karpency, Tony Bellew, and Aleksy Kuziemski. It’s not clear when the 24-year-old will actually face a worthy world title challenger, but there seem to be no immediate plans to do so and, given the horrid WBO light heavyweight rankings, he won’t be in anything resembling a real fight unless he ditches his title.

WBA light heavyweight titlist, Beibut Shumenov, was once regarded as a young lion, tearing apart shop-worn veteran fighters despite having little professional experience. He raged through second and third-tier fighters until he actually won a world title via controversial split decision in a rematch with Gabriel Campillo in January, 2010. Since then, Kazakhstan’s Shumenov has been less dynamo and more street sweeper with just three title defense in almost two-and-a half years. His first defense, against Vyacheslav Uzelkov, was a solid win over a fringe contender, but after that, it’s been pure powder puff prizefighting. Defenses against the ancient William Joppy and the king of the “how the hell did he get a title shot” crew, Danny Santiago, did not impress. Shumenov is scheduled to defend his belt in June against Enrique Ornelas– something that is hardly making fans salivate in anticipation.

The European portion of the middleweight division is especially vexing with several fighters wearing belts despite carrying the lightest of loads and, in some cases, no loads at all.

Among Pirog, Golovkin, and N’Jikam there are eight defenses with none coming against a true contender. Of the eight, only Kassim Ouma (who challenged Golovkin) and Nobuhiro Ishida (who challenged Pirog) could be considered even marginally credible. Most hardcore fight fans would be hard-pressed to recognize the names of the other challengers, much less make a case for them being legitimate contenders for a world title.

Super middleweight, Karoly Balzsay of Hungary, was awarded a version of the WBA world title practically on the eve of real WBA champ Andre Ward’s coronation as World Boxing Classic tournament winner. Balzsay won this “honor” by defeating mighty Stanyslav Kashtanov of the Ukraine. Prior to becoming “world champ,” Balzasy was best known for losses to the only two decent fighters on his resume– Eduard Gutknecht and Robert Stieglitz. He made his first defense against passable German, Dimitri Sartison, but don’t expect much of the Balzsay Era.

Meanwhile, in the hot and heavy junior middleweight division, the WBO is boasting Russia’s Zaurbek Baysangurov as their world champ. Baysangurov won the vacant interim title against Brazil’s Mike Miranda (?) last year and is celebrating his promotion to full-champ status with an upcoming defense against unknown, undeserving French pastry, Michel Soro. Then, seeing as how Baysangurov got the nod to big league status, the WBO saw fit to sanction a Lukas Konecny–Salim Larbi bout for the vacant interim title in April. Surely, fans will be speaking of Konecny’s seventh round TKO of his fierce rival in the epic Konecny-Larbi battle for years to come.

It doesn’t take a genius to see where all this is headed and why dirty old habits are returning on such a widespread level.

Boxing has expanded greatly in Europe, especially in the former Soviet Bloc countries. The exploitation of naive, boxing-hungry fans is big business. There’s plenty of money to be had in filling stadiums and arenas for bogus title fights where the fans don’t yet know enough about the sport to realize that their national hero is beating up a guy who should be teaching Tae Bo classes at the local ladies gym.

Explaining the boxing-savvy Brits’ blind eye when it comes to Nathan Cleverly is harder to do, but it may be caused by a burning desire to have another young, elite fighter on the world scene after a pretty rough 2011-2012 for UK fighters.

But as long as there’s easy money to be made against bogus challengers and sanctioning bodies more than willing to take short money at the expense of the sport, we’ll never know how good any of these guys could’ve been. And the fans, as usual, get the short end of the stick.