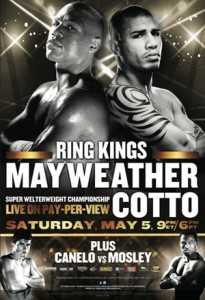 The event was presented by Golden Boy Promotions, Mayweather Promotions, and Miguel Cotto Promotions, in association with HBO Sports and the MGM Grand Hotel and Casino.

The total pushes Mayweather vs. Cotto to the second highest-grossing non-heavyweight pay-per-view event of all time, with Mayweather’s May 5, 2007 fight with Oscar De La Hoya sitting at first place with a reported 2.4 million buys. De La Hoya vs. Mayweather raked in $137 million at the box office.

Mayweather vs. Cotto also took in $12,000,150 at the live gate, with a reported 14,612 tickets sold, making it the ninth highest grossing live gate in Nevada history.