In the electric main event of the Ring Kings pay-per-view, one of the best fighters to ever come from the island of Puerto Rico stood proudly opposite one of the greatest American boxers of this era. With nearly 15,000 screaming fans in attendance (breaking the top-ten live gate record in Nevada), over 1.5 million PPV buys and countless souls watching on, the two gladiators engaged in what was to become 12 truly intense rounds of hostilities. By the end of the night, though, Mayweather had dismissed yet another credible adversary via lopsided decision. Now that this chapter in Floyd Mayweather’s book has been written, it’s time to explore what lies next for the undefeated superstar. 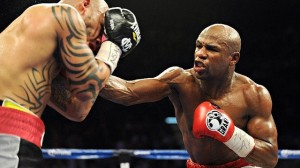 Starting on June 1st, Floyd Mayweather will report to the Clark County Detention Center in Las Vegas, Nevada for what will likely be a shorter term than his originally assigned 87-day sentence for domestic abuse. This time will allow the 35-year-old some space from his normal life and perhaps will assist in providing some perspective for the 8-time world champion.

Mayweather will be faced with many questions upon his release and will be in a unique position to stage a mega-fight with nearly anyone he chooses – or he can decide that he has accomplished enough and choose to forever walk away from the sport. Both choices are honorable, but “Money” Mayweather will always be a debatable figure – some will say that he has done enough to ensure his place among the greatest in history and some will undoubtedly point to the fact that he hasn’t faced this generation’s other superstar, Manny Pacquiao.

There are, however, many exciting match-ups to be had for the artist formerly known as ‘Pretty’. In their recent 12 round battle, Miguel Cotto, using a tide of continuously shifting ring dynamics, found a way to progressively alter his plan of attack, splitting Mayweather’s focus and winning him some well-earned points on the scorecards. Floyd Mayweather, however, had something else in mind and before the night was through, submitted a time-capsule performance, walking away with a land-slide points decision (and Cotto’s WBA title…along with the WBC’s fancy razzle-strap) in perhaps one of his most thrilling encounters to date. That being said, there is a possibility that age (and not the reported sickness he was afflicted with) is finally taking a toll on Mayweather, leaving room for some conceivably high-drama affairs with a few key figures within the sport:

Lineal middleweight kingpin, Sergio “Maravilla” Martinez (49-2-2, 28KOs) – This is an extremely attractive match-up for hardcore boxing fans. Two of the most athletically gifted active fighters squaring off in a battle of reflexes, speed and counter punching. A highly entertaining prospect, no doubt, but this option will more than likely be shot down by Mayweather, who doesn’t put on pounds above the welterweight limit effectively. There were talks of Martinez meeting Floyd at a catchweight, but the line has been drawn with the Cotto fight and it seems that Mayweather will take no more fights unless they are contracted at a normal divisional limit.

WBA welterweight champion Paul “Magic Man” Malignaggi (31-4, 7KOs) – This would be a surprisingly easy fight to put together. Paulie works for Golden Boy and would submit to any anti-doping tests that Floyd could request. Malignaggi traveled to the other side of the planet to acquire his piece of the 147 pound title picture, but it likely won’t be attractive enough to lure Floyd Mayweather out of his gigantic house and into battle. The Magic Man poses a low threat to dethrone Mayweather and this low-risk/low-reward type of match-up wouldn’t be enough to get Floyd interested (let alone garner high pay-per-view figures, which to a man named “Money”, will be the deciding factor).

21-year-old WBC junior middleweight champion Saul “Canelo” Alvarez (40-0, 29KOs) – The prodigious Canelo (who himself draws ‘Superbowl’ numbers when he fights in Mexico) has a style that seemingly would pair well with Mayweather’s own, he is a standard come forward pressure fighter and has youth and energy on his side. Also on Alvarez’ side are legions of Mexican fans that would love nothing more than to watch their adopted red-headed step-child scrap with the world’s best fighter at the immense Estadio Azteca (the 5th largest stadium in the world). Following the Mosley fight, however, Alvarez’ handlers seemed to feel that he isn’t quite ready for Money at this stage of his career.

Former unified junior welterweight titlist and Bolton, England native Amir “King” Kahn (26-2, 18KOs) – Floyd Mayweather knows how immensely supportive and fanatical the UK contingent are. When he fought Ricky Hatton in 2007, immense numbers of rabid fans crossed the Atlantic to watch their Manchester hero valiantly lose his “0” to the overwhelming skills of Mayweather. That stellar performance earned Mayweather mobs of British fans that would positively sell out the O2 Arena in London and possibly fill the 90,000 seats available in Wembley Stadium. An enormous proposition indeed, but with Mayweather’s popularity and the wild support that certain British athletes receive it is entirely conceivable.

The fighting pride of General Santos City, Philippines, and 6-time world champion Manny “Pacman” Pacquiao (54-3-2, 38KOs) – This is the fight that everyone wants to see. A rare materialization in boxing of two very superstar champions campaigning in the same weight division; a dream match-up pitting this generation’s greatest pugs. This fight was met with more road blocks than perhaps any fight in the storied history of the game. A long and exhausting series of media misdirections and propaganda flooded the internet and clouded the minds of unsuspecting fans. This fight should have been finalized 3 years ago, but red tape and drug testing disagreements postponed this fight indefinitely. Manny Pacquiao’s die-hard supporters claim he is the best fighter in the world and Pacquiao has put some compelling performances together to back this theory up. The only way to find out (in the words of famed announcer, Lupe Contreras) “quen es mas macho?” is to finally have these two meet once and for all.

Retirement, of course, is a very real possibility for Floyd Mayweather, who intimated throughout this past training camp that he wouldn’t be interested in continuing his hall of fame career unless he could goad Pacquiao into one last super-fight. With or without Manny Pacquiao, Floyd Mayweather has faced nearly every conceivable style and put many record-breaking statistics into the history books. He has inspired an entire generation of fighters to mimic his style and has made millions upon millions of dollars (and fans). To say that he has accomplished enough to honorably retire from the sport would be an enormous understatement.