Wow, I go to the bank and run some errands on a lazy Wednesday morning and come back to a raging firestorm.

If a man lies with a man as one lies with a woman, both of them have done what is detestable. They must be put to death; their blood will be on their own heads.

But don’t go back and try to find that actual interview. Examiner.com apparently pulled the piece and replaced it with another version. Who knows, maybe “citizen journalist,” Granville Ampong, the writer of the original article,  pulled and edited it, himself, after getting a taste of the heat quickly generated. 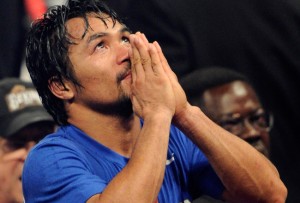 Those who read the original interview, however, definitely claim that some major editing work has been done. James King, of The Village Voice, says the current version of the Examiner article “wasn’t like that yesterday. It’s not the same story that was up there.”

In any case, the accounts of the original interview featured Pacquiao pontificating on President Obama’s pro-gay marriage stance and offering up Bible quotes to justify his opposition to Obama’s take on the issue.

It was all a very innocuous thing, until the quote in question surfaced.

Now, Pacquiao, the Bible expert and alleged future missionary for Christ, is denying that he ever quoted that Bible passage.

“I don’t even know that verse from Leviticus because I never read Leviticus,” Pacquiao told long-time cheerleader and Team Pacquiao hanger-on, Ronnie Nathanielsz.

So, Pacquiao is a Bible expert, except for the parts that could get him in trouble? Are we expected to believe that a guy being billed as a born again true believer– one who routinely ministers the gospel to friends, family, and the media– is unfamiliar with an entire book of the Bible?

Maybe he’s really not so born again. Maybe it’s an act. Maybe he’s back-peddling in the face of controversy. Maybe Ampong did put words in his mouth.

We’ll never know now because the spin cycle has begun and the truth is already being twisted and shaped to fit Manny’s hard-peddled image. There are articles already being posted about Manny liking gays and having gay family members. Hell, within 48 hours, Pacquiao may even BE gay.

This wouldn’t be the first time that Pacquiao promoter, Top Rank, had to work overtime to nullify statements made by the fighter and his close associates. There was the infamous “I’m afraid of needles” statement after the issue of random blood testing came up in negotiations with Floyd Mayweather. Then, there was the “I’m superstitious about giving blood” line. Most recently, there was the “I have agreed to all testing demands,” declaration that, to this day, will elicit ten different responses from ten different members of Team Pacquiao if one would try to clarify.

But that’s the job of a good promotional team– to smooth over the rough edges and spin things in a positive light.

If Manny’s religious awakening is true, though, the quote attributed to him is consistent with his beliefs. Unless, of course, his beliefs are just for show.

Again, we’ll never know because Manny Pacquiao never owns up to the unpleasantries in life. In his life as a pop culture icon, everything is always merry and bright. Those who question him are liars, those who challenge his domain are cowards. One website owner went so far as to personally tell me that he only prints favorable articles about Manny Pacquiao because Pacquiao is a “good role model for the youth of America.”

Whether Pacquiao actually feels that gays should be murdered for their “sins” or simply shunned until they burn for all eternity in a lake of fire, this shouldn’t be an indictment of a Hall of Fame boxing career, nor should it be a call to arms to diminish his in-ring legacy. This incident will likely fall on deaf ears in the rough, testosterone-heavy world of boxing fandom, anyway. And, maybe it should. Work is work, personal stupidity is between you and your conscience.

But, it does speak volumes about the fighter as a man.

Unlike Floyd Mayweather, who actually lives the vapid lifestyle he professes, Manny Pacquiao is a hypocrite– a perpetual man-boy who will never stand on the weight of his own words. He doesn’t have to. There’s big money in speaking for him.