In honor of Lamont Peterson’s failed drug test and subsequent cancellation of his rematch against Amir Khan, I took it upon myself to research and compile a list of the sport’s most notorious drug cheats.

The following list is made up of boxers who received, tested positive or admitted to using performance enhancing drugs.

So let’s ditch the fluff introduction and get straight to the 10 Greatest Performance Enhancers of All-Time.

Remarks: Botha defeated Axel Schulz for the IBF heavyweight title in 1995, but was stripped of the title after testing positive for steroids.

Remarks: Officially, the only thing Morrison ever tested positive for was HIV. In 2006, Morrison claimed his 1996 HIV test was a false positive caused by steroid usage. Morrison may have watched too many Star Trek re-runs, as he also said he could teleport himself. 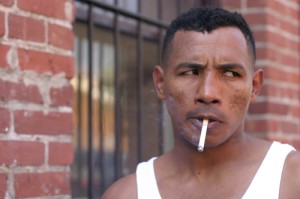 Remarks: Mayorga failed his post-fight drug test following his knockout loss to Oscar De La Hoya in 2006. Furosemide is a banned diuretic used to either lose weight in a short amount of time or mask steroid usage. In this case, I bet Mayorga was constipated.

Accomplishments: Arrested for DUI two weeks before a fight

Remarks: JCC Jr. used the banned diuretic presumably to make weight for his fight against Troy Rowland in 2009. He easily beat the tomato can, but the result was later changed to a no-contest due to his failed drug test. After struggling to make weight against Marco Antonio Rubio in February, Chavez managed to escape the great state of Texas without taking a post-fight drug test.

Remarks: We’ve all seen the tape of Vitali Klitschko’s half brother Drago shooting up ‘roids. I don’t know what’s worse losing the biggest fight of your life or losing your wife to Flavor Flav.

Remarks: The number of world titles he has won is just as long as the number of steroids he has taken. Toney is one of the toughest SOBs to ever enter the ring and yet he failed two post-fight drug tests. Toney tested positive for steroids after winning the WBA heavyweight title from John Ruiz in 2005. He failed another drug test in 2007 following his victory against fellow steroid juicer Danny Batchelder. Toney’s pudgy physique remained the same despite the use of steroids.

Remarks: Jones tested positive for PED’s after his 2000 win over Richard Hall. According to Jones, the over-the-counter product Ripped Fuel –which contains androstenedione– was responsible for his failed drug test. Androstenedione was on the IBF’s banned substance list.

Accomplishments: Co-starred along side Justin Timberlake in Alpha Dog

Remarks: The 2-time junior middleweight champion is a prime example of how steroids don’t stop you from getting knocked out. Thanks to his Winstrol fueled performance, Vargas was able to bully Oscar De La Hoya for much of their 2002 title unification fight. As Vargas repeatedly assaulted De La Hoya, HBO blow-by-blow announcer Jim Lampley remarked how Vargas had “seemingly super natural strength for a one-hundred-fifty-four pounder.” And as it turned out, he sure did.

Accomplishments: Passed every drug test during his 19-year career

Remarks: Mosley was the second of three known opponents to use performance enhancers against Oscar De La Hoya. Mosley went on the Barry Bonds BALCO diet for his 2003 rematch against De La Hoya. And unlike Vargas and Mayorga, Mosley’s BALCO products carried him to a close controversial win.

Remarks: Federal documents say Holyfield received packages containing human growth hormones in 2004. The packages were addressed to an “Evan Fields,” but Holyfield’s PED usage could have possibly started many years beforehand. According to Dr. Margaret Goodman, Holyfield was questioned by the Nevada State Athletic Commission about HGH usage following his 1994 loss to Michael Moorer. After the fight Holyfield encountered heart problems that could have been caused by growth hormone usage.

*******************
Alphonso Costello is a member of The Sh-it List Makers Association of America (SMAA). You could also find his work at www.FightClubWriter.com