Sergio Thompson (23-2-1, 21 KOs) had a predictably easy time with Argentina’s Juan Ramon Solis (17-6, 6 KOs) en route to a fifth round TKO victory, but also showed why his March victory over Jorge Linares could very well have been a fluke. 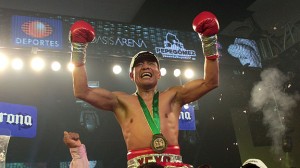 Short-armed, crude, but aggressive, Thompson pursued a perpetually back-tracking Solis and managed to score two knockdowns before the end of the bout– a legitimate first round knockdown via wide right hand and a fourth round dropping that looked more confused push than punch.

In the process of a foregone conclusion win, Thompson took several flush punches from the hapless Solis and spent most of his time, even when in pursuit, horribly off-balance. Thompson’s only defense seemed to come from the Bizarro World’s boxing handbook– Move straight back with chin held high.

Still, what the Cancun native had was more than enough for Solis, who spent the entire fifth round bothered, tired, and looking for help. Soon, Solis’ corner picked up on their fighter’s distress and mercifully threw in the towel.

Thompson, who was screwed out of a title shot after beating Linares in a WBC “eliminator,” walked away with something called the WBC International Silver lightweight title (hurray!). He also proved himself to be the most vulnerable of all Top 10 lightweights.

In the co-feature, 22-year-old Pablo Cesar Cano (24-1-1, 19 KOs) whittled down a game and fairly capable, 23-year-old Fidel Monterrosa Muñoz (29-6, 23 KOs) before taking the bout via KO in the ninth round of their ten-round junior welterweight contest.

Evenly-contested over the first seven rounds, Colombia’s Muñoz went downhill fast in the eighth, bothered by Cano’s body work and barely making it out of the round.

Mexican, Cano, started the ninth frame in attack mode and dropped his opponent with a body shot amid a flurry of activity. Muñoz squirmed on the canvas, claiming a low blow, and took the full ten count. Replays showed that the blow was, indeed, low, but right at the belt line and not in an area that could’ve produced the Colombian’s writhing pain.

On the undercard, Deontay Wilder (22-0, 22 KOs) enjoyed a lovely paid vacation with a one-round, 26-second shellacking of “The Pride of Bartonsville,” Jesse Oltmanns (10-3, 7 KOs).