(As part of our Friendly Fire series, the following is an article written by a reader of The Boxing Tribune. If you would also like to contribute guest commentary, send an email to Editor in Chief, Paul Magno, for more information: paulmagno@theboxingtribune.com)

Where is Congressman Manny Pacquiao?

It has been almost 2 months since a standoff between Philippines Coast and Chinese Maritime Surveillance ship started in a dispute over Scarborough shoal in South China Sea. It was a Naval standoff which caused the dogs of War to bark loud in China. These are not just whispers and rumors of battle, but shouts for War. 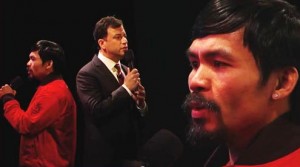 A top Chinese general wants decisive military action against the Philippines, taunting the Philippines that America won’t honor their mutual defense treaty in case China decides to attack one of the weak est militaries in Asia. It has insulted the Philippines military capabilities as nothing compared to China military might. It would be a fight between a great Imperial Dragon against a toothless tiger in Asia.

Meanwhile, in cyberspace, there has been ongoing battles between Filipino and Chinese hackers, sparked by the standoff.

In other fronts, China has cancelled all travel to the Philippines, restricted the Philippine imported fruits such as bananas, papaya and pineapple, letting them rot at Chinese ports as a result of the economic sanction.

The Philippines responded in global ralies at Chinese Consulates in major Cities of the World such as Toronto, New York, San Francisco and Los Angeles. The Philippines government has called the Association of South East Asian Nation (ASEAN) to stand behind the Philippines. The government also asked the U.S. for more military surplus and invited China to bring the dispute to the International Tribunal for the law of the Sea (ITLOS), but China declined.

Again, where is Manny Pacquiao? He is on Bible study and, recently, rebuked President Obama about his approval of gay marriage. Manny Pacquiao went to watch Jessica Sanchez of the American idol finals.

The President of the Senate, Juan Ponce Enrile in his statement said that “Filipino people must support the President of the Republic regarding the dispute of Scarborough Shoal, that this is beyond politics. [It is] about our sovereignty. That the Philippines has no choice but modernize the Navy and Air Force, and stand up against China’s bullying.”

The Philippines’ two bishops want to offer “Oratio Imperata” a powerful prayer that has seemingly spared the country from many typhoons, drought and deadly disease. They said a strong prayer is needed in order to arrived at a peaceful solution.

Again, what has Congressman Manny Pacquiao, said or done about this issue? NOTHING. He is deep into training and Bible study and his legions of Bible study members are growing and standing room only. He is planning to make his first Hollywood action movie with Rob Schneider after his June 9th fight. He is completely a changed man and talks more about saving souls, but not defending the Philippines. He teaches evangelist thought, but not as a champion of the Filipino people.

I think Pacquiao has the right position and status to take the lead in defending the Philippines sovereignty against the BULLY Imperial RED Dragon. In the next election, Manny Pacquiao is planning to run as Governor, then the next stop is to become President of the Philippines. His inaction against China, will come back to haunt him when he runs for higher office. Questions will be asked about his patriotism, leadership and even his education.

Manny Pacquiao could have assembled the Justice League or Avengers-caliber people to rally against China. He could have contacted the exiled leader of Tibet, the Dalai Lama and Richard Gere, a passionate supporter of Tibet against Chinese occupation. He could have invite Angelina Jolie, a U.N. special envoy, Mark Wahberg, Steven Segal, Quinton “ Rampage “ Jackson, Ricky Hatton, Rob Schneider. He could mobilize his Pacquiao Worldwide Army ( PWA ). As he claims that he can multi-task, I’m sure he can do both Bible study and take the lead against China on weekends.

Instead, The Pacman is too preoccupied with his Bible study. He forget that he is still a Congressman, a politician and he has an obligation to his people. His leadership is needed in a political crisis of this magnitude.

Since World War II, never in the history of the Philippines have we been threatened with War by aneighboring nation. Manny Pacquiao cannot lead the Philippines if he has no connection with its people in regards to Philippines sovereignty.

When the Philippines are threaten with War, insulted that Filipinos are nothing but maids in Hong Kong, and challenged that NO other nation would come and help us when the bullets start flying. When Philippines sovereignty is trampled by China’s claims over our island, which is clearly ours by International Law. That Chinese fisherman, encouraged by their government, continue the rape of our corals, engage in unlawful fishing method, ignore Philippines Law, threaten Filipino fisherman. Meanwhile, the Philippines Navy and Coast Guard can only watch in disgust and protest.

As a fan and patriot, I’m extremely disappointed that the Philippine’s living and mighty hero, Manny Pacquiao is doing NOTHING but reading the bible and disputing Barack Obama.