Up-and-coming unbeaten British middleweight Billy Joe Saunders (13-0, 9 KOs) continues his efforts to rise to the top of the list of 160-pound prospects as he takes on journeyman Bradley Pryce (33-10, 18 KOs) Friday night at York Hall in London. 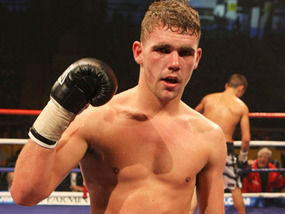 Saunders, who represented Great Britain at the 2008 Beijing Olympics, has a strength-of-schedule commensurate with a 22-year-old prospect. He recently knocked out then 8-2 Tony Hill only a month ago, and will for the sixth time in his last seven fights be facing a fighter with a winning record. Against fighters bringing winning records into the fight overall, Saunders has five knockouts from seven attempts, compared to four from six against at or below .500 competition. This would seem to suggest durable power; his opponent has a winning record in this fight but has been stopped four times before.

Bradley Pryce, for his part, is the much smaller man. He turned pro at junior lightweight, although he is 5’11/180cm tall. His power has not followed him up the scale; most of his 18 KOs as a pro came between junior lightweight and welterweight, and his victims have included some truly awful fighters, including guys who brought records of 9-83-7 and 28-148-7 into their fights with Pryce.

This has all the looks of a showcase fight for Billy Joe Saunders, another stepping stone as he steadily improves the quality of his opponents in his efforts to prepare for a launch into the upper echelons of the 160-pound weight class. Boxrec has him 66th overall so far in his career; he has a ways to go to crack the top twenty.

Saunders-Pryce will air in the UK on BoxNation at 7:30 PM British time; check local listings for availability in your area.