Friday night from the Sands Casino in Bethlehem, PA Jr. Middleweight “King” Gabriel Rosado (19-5, 11 KO) gets the biggest opportunity of his career.  He will be headlining the Main Events NBC Sports fight night card when he takes on long time contender Sechew Powell (26-4, 15 KO).  Rosado has earned his shot the hard way, taking up boxing later in life and suffering early losses that hurt his record, but made him the fighter he is today. 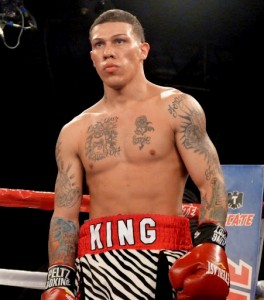 Rosado started boxing at eighteen years old and turned pro at nineteen in 2006.  He went 14-5 in his first nineteen bouts through 2010.  He suffered tough losses including a knockout at the hands of Alfredo Angulo and a decision loss to Fernando Guerrero.  Along the way he also showed signs of talent to come with wins over Kassim Ouma and Latif Mundy.

Following his fifth loss in 2010 to fellow Philly fighter Derek Ennis, Rosado began really putting together his identity with the help of his talented Philly trainer Billy Briscoe.  He has won five in a row with three knockouts and has matured into a balanced fighter that has found his identity in the ring.

His most recent victory came in the first NBC Fight Night card when he became the first person to stop hard-nosed veteran Jesus Soto-Karass.  On that night, Rosado put together all his talents to dominate and stop the Mexican warrior over five lopsided rounds.  In the past, Rosado showed signs of various skills.  From fight to fight he would show blends of power, pressure, defense, head movement, boxing skills, and other attributes but had not yet put together everything on one night.

Then, against Soto Karass, he did it all in one night leaving everyone who saw the performance impressed.  Rosado talked about what his last fight did for his career.

The obvious question for Rosado at this point was to talk about who he is and what his ring identity has become.

Among those impressed with his performance were the boxing executives at NBC Sports.  They called for Fight Night promoters Main Events to feature Rosado on a Fight Night card and went as far as to add an extra date to the series to give Rosado the opportunity to headline the card.  Rosado is proud of this accomplishment and relishes his Philly roots in a tough city where people appreciate a guy that traveled a tougher road to the top.

“People appreciate the underdog, the blue collar guy.  I’m that guy that nothing was handed to me.  I had to earn everything I got.  Me and my trainer we just did it the hard way.  I’m starting to get the type of fights I deserve and the type of exposure I deserve.”

When asked if he looks back and regrets the losses he suffered in his career Rosado shakes it off.  He has an old school mentality that is proud of who he has fought and the lessons learned from winning and losing along the way.  He believes he simply learned on the job and is now a different fighter.

“That’s what made me who I am.  I’m proud of my record.  A lot of people don’t know I started boxing at the age of eighteen.  This wasn’t a sport I grew up doing.  The first time I ever stepped in the ring was at the age of eighteen.  I turned pro at nineteen.  I only had eleven amateur fights.  The losses I suffered early in my career was just me learning on the job.  I was still green.  I was still learning.  Now I’m seasoned.  I’ve been in five training camps with Bernard Hopkins.  I’m around professionals.  I’m growing and I’m learning.  I’m a different fighter now.”

Rosado has begun gaining attention and has developed into a talented fighter capable of making noise in the loaded 154lb division.  He faces a tough challenge in the veteran southpaw Sechew Powell Friday night. Rosado talked about what it will take to bring down the slick contender.

“So with Powell I’m going to get in that ring and be confident with my ability.  He’s a slick southpaw and he pretty much wants to counter you from the outside.  What I’m going to do is make it uncomfortable for him.  I have to, I can’t make it his style of fight and go in there and wait for him to make a mistake.  With him you have to make a move.  You have to be first.  So I’m going to make him fight when he doesn’t want to fight.  Got to just bring it to him and kind of like the same thing with Soto-Karass.  I made Soto-Karass uncomfortable.  He’s never been backed up.  He’s always the guy who puts pressure.  That’s the game plan making Sechew fight when he doesn’t want to fight because he’s at his best when he gets to pick his shots and when he fights in spurts.  He fights in spurts, but I want to make him fight the whole round.  Make him fight at a different speed.”

Rosado is taking the Powell fight seriously as he chose to leave his hometown of Philadelphia to avoid distractions.  He went cross country to the famed Wildcard Gym in Los Angeles for several weeks to train.  This allowed him to avoid the pitfalls of being at home and he got the opportunity to get top notch southpaw sparring from the many Wildcard boxers.

“It was just a matter of sacrifice.  In Philadelphia there’s a lot of distractions.  It’s a wild city.  Friends want to go out.  I just wanted to go away from that.  I didn’t want to get tempted.  Go away to the Wildcard gym and focus one hundred percent on the fight.  Just train and go to the room and relax.  I was able to do that at the Wild Card gym.  In Philadelphia just too much going on and this fight’s just too important to be distracted.”

Rosado is firmly convinced he is prepared to defeat Powell and move forward to a title shot.  He knows his hard work in and out of the ring has placed him where he is now in the boxing landscape and believes his time has come to fight for a title.

” I want a world title.  I think I’ve earned it the hard way.  I’m number five in the IBF and that’s no politics.  That’s just off of pure hard work.  I’m number five in the IBF, number nine in the WBC.  If I get the victory I’ll be top ten in the WBO.  The key is to get the winner out of Delvin Rodriguez and Austin Trout.  If not, I’d like to get the winner between K9 (Cornelius Bundrage) and Cory Spinks.  Unfortunately Paul Williams had a horrible accident and I pray that Paul Williams is back to his normal self.  Now Canelo (Saul Alvarez) doesn’t have anyone to fight.  Canelo is another guy I’d like to fight as well.  I just want to fight anyone with a title right now.  I just want to fight any of those guys.

“I think guys pretty much got the idea that I’m not the guy with five losses.  The thing is once you’re in the ring; this win will put me that much closer and probably put me in a spot where it’s a mandatory.  Once it’s a mandatory you know they have to fight me.  I’m hoping I can just get one of these guys.  I think the fans will love it.  I need that type of exposure.  You know it’s funny.  A lot of these guys get handpicked opponents, it’s crazy.  But I would definitely like to fight one of these guys soon.”

For now, Rosado is focused on his fight Friday night.  He knows his plans for a title shot will sail away if he doesn’t handle business against Powell.  Rosado not only plans on winning, but plans to put on a performance on TV as he did against Soto-Karass that provides excitement and entertainment for everyone watching.

“Just looking forward to this fight.  It’s going to be a great fight.  I’m going to give the fans their money’s worth.  Not going to be a boring fight because absolutely I have war on my mind.  I’m ready for anything.  I’m willing to do whatever it takes to be victorious on June 1.  I’m not cocky but, I just don’t see me losing to Sechew because I’m just extremely, extremely determined to win this fight.  This fight means everything to me and I have to win.  I’m gonna fight my ass off.”