Ryan Rhodes may have come to the end of his career tonight when he suffered a stoppage loss on the Munroe-Quigg undercard at the Manchester Velodrome. 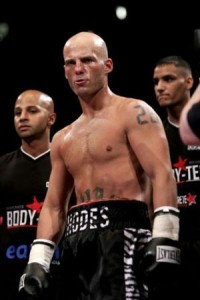 Rhodes was stopped in seven rounds by earnest Belarusian Sergey Rabchenko in an entertaining scrap for the vacant EBU light-middleweight crown. Rabchenko came to the fight unbeaten in twenty contests, fifteen of which he’d ended early, so that he was expected to give the veteran Rhodes, 35, a difficult night but t was widely felt that he’d succumb to Rhodes’ sublime skills and greater experience. In the event, apart from a couple of uncomfortable moments in the third round, when a sharp right hand from Rhodes had Rabchenko wobbling, the Belarusian marched Rhodes down throughout the fight and was much the stronger man. Rhodes started fast, switching from southpaw to orthodox regularly, and appeared evasive as he slipped punches on the ropes, but Rabchenko was still able to spear him with some effective shots. Rhodes own punches were fast and precise, but other than the shot in the third round failed to trouble the on-coming Belarusian. From the fourth, Rhodes began to mark up under the eyes and was visibly weakening under the constant pressure exerted by the younger man.

The end came in somewhat surprising fashion, towards the conclusion of a seventh round in which Rhodes had established a measure of control behind his jab and had walked Rabchenko on to his southpaw left, when Rabchenko whipped over his own long left as Rhodes retreated. The blow appeared to glance across Rhodes’ body, but the Sheffield man crumbled to the floor in severe pain. He rose at eight, but the referee didn’t like the signals he was giving off, and waved the fight over. Afterwards, Rhodes said the shot “ was the best body punch I’ve been caught with my whole career.”

Rhodes pledged to continue his career, writing off the loss as a one off, but may reconsider once he sees the tape, He drops to 46-6, 31 KO’s.

Murray, meanwhile, fresh from a brave but abortive challenge on Felix Sturm’s WBA 160 pound title last year, had a far easier night of it with Frenchman Karim Achour, breezing to a comprehensive ten round decision.

Achour, 13-3-2, 2 KO’s, started briskly, but was out-powered by strongman Murray with every exchange. Murray was in control throughout and deserved the referee’s score of 98-93. He moves to 25-0-1, 10 KO’s, and will be watching closely the outcome of Chavez-Lee on the other side of the Atlantic.

Earlier in the evening, promoter Ricky Hatton’s heavyweight protégé Richard Towers, 32, joined the growing ranks of British big men attracting international attention when he took the EU heavyweight title (a minor belt not to be confused with the EBU) when he stopped Frenchman Gregory Tony in the ninth round. The 6 feet 8 inch Towers, 14-0, 11 KO’s, looked awkward at times and was spoilt by Tony, 17-3, 14 KO’s, at moments in the fight, including a torrid fifth round in which he was battered all around the ring by the Frenchman and ended the round on rubber legs. Towers showed he has heart and can dig, dropping his man in the second round with a straight right, and again in the seventh and three times in the eighth as Tony tired. Finally, at the beginning of the ninth, Tony quit citing arm problems.