Just 24 hours removed from his last bout, Will Rosinsky received, as he put it,  “the opportunity of a lifetime”.  On July 7th, the super middleweight from Ozone Park, Queens will get another shot in the national spotlight against former middleweight world champion, Kelly Pavlik on HBO’s “Boxing After Dark”. 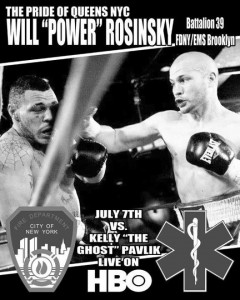 Rosinsky was last seen nationally on Showtime’s “Showbox” program back in October of 2011, losing a (questionable) unanimous decision to Edwin Rodriguez. Rosinsky gave Rodriguez all he could handle for 10 rounds and many felt he had earned at least a draw in that bout.  Even those that favored Rodriguez felt the scoring was ridiculous. Since then, he’s racked up two victories (TKO 3 Zane Marks, W 8 Aaron Pryor Jr.) the latter coming just a few days ago on Lou DiBella’s Broadway Boxing card in New York.

While other fighters turned down the opportunity to meet Pavlik this time around, the four time Golden Gloves Champ jumped at the opportunity, “I wasn’t hesitant at all with taking this fight” Rosinsky told me, “I’m in great shape and haven’t been out of the gym since the Zane Marks fight in March, short notice wasn’t an issue”.  To be fair, Pavlik will also be fighting on short rest, having fought June 8th on ESPN.

Pavlik is still in the process of rebuilding his career after personal issues sidelined him for a stretch, so this could be the perfect time for a guy like Rosinsky to come in and play the spoiler, he clearly sees this as his time to shine: “ In my eyes, it’s the giant step I need to place myself within the pool of top contenders on the world class level. I respect Pavlik as a fighter, but I feel I have a lot to bring to this fight. I’m very excited and will be ready to showcase my world class abilities on fight night live on HBO”.

Some are looking at this as just another step in Pavlik’s road back to the world ranks, but overlooking Rosinsky would a major mistake.  It’s going to be a tough night for The Ghost, so he better bring his “A” game.