Believe me, it pains me in the gizzard to speak negatively of any stab at boxing reform, especially one as near and dear to my heart as the establishment of a national commission. But the Professional Boxing Amendments Act of 2012 is not the immediate answer to boxing’s long-standing need for sanity. 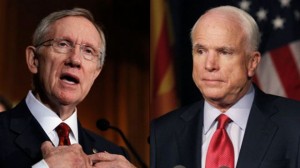 Co-sponsored by Arizona Senator, John McCain and Senate Majority Leader, Harry Reid of Nevada, the legislation is nearly identical to the one previously introduced by McCain and voted down several times in the past. This time, it only stands a slightly better chance of approval due to the controversy surrounding the June 9th Pacquiao-Bradley decision and the involvement of heavy-hitter, Reid.

The legislation would establish the United States Boxing Commission (USBC), an organization dedicated to establishing and enforcing Federal mandates regarding the regulation of fights, fighter safety, boxing-related business, and officiating. According to Senator McCain, the USBC would “work with the boxing industry and local commissions to improve the safety, integrity, and professionalism of professional boxing in the United States.”

However, some fatal flaws are also built into the legislation that could render it useless before it even becomes enacted.

First, the USBC would still operate in deference to the sanctioning bodies (WBA, WBC, IBF, WBO), which would still be allowed to “provide a list of judges and referees deemed qualified” for any given title fight, eliminator, or other officially sanctioned bout. While the commission would have final say as to who actually officiates, this is not much different than the current system in place, which allows state commissions to assign officials from a list of “acceptable” judges and referees pre-approved by the sanctioning body and promoter.

If there’s any part of the boxing process that’s in real need of reform it’s in the selection of the officials and the often incestuous relationship between who gets which assignments and how one becomes “pre-approved” for jobs.

The Professional Boxing Amendments Act of 2012 doesn’t address this issue at all, it merely passes the buck from the state to the federal level.

Another problem with the legislation involves the co-sponsor, Senator Harry Reid. The long-standing senator from Nevada is waist-deep in the Vegas boxing culture, has personal friendships with many of the sport’s power brokers and top officials and also counts promoters Bob Arum and Don King among his financial donors. Would Reid be eager to go on the offensive against people pumping so much money into the state economy and into his own political war chest?

A third problem is in enforcement. While the USBC would have the power to suspend or ban any fighter, official, promoter, or manager in violation of regulations, the actual enforcement of these penalties in a sport like boxing would require massive federal involvement. With a long-established subculture of corruption and coercion, boxing has proven itself to be almost impossible to clean up, even by agencies like the FBI, which frequently investigate obvious frauds, but only manage to bring down a few patsies from the fringes of the sport.

Senator McCain has been active in trying to enact boxing reforms in the past and has succeeded in passing the Muhammad Ali Reform Act, which was aimed at improving the working conditions of the fighters and protecting them in their business dealings with promoters and managers. Still, violations frequently occur and fighters who balk at mistreatment face loss of payment and the promise of a lengthy legal battle if they make waves. Any attempt at reform at the national level has to be iron-fisted, intensive, and worked by outsiders, without ties to the industry in any way.

By allowing for state and local commissions to have their say and keeping the sanctioning bodies in the mix, the USBC is all but assuring itself to be little more than a paper tiger, designed to appease fans and issue a few token punishments here and there, but not much else.

There are also concerns regarding the funding of the commission. The legislation currently forces the promoters, managers, and fighters to foot the bill for the extra branch of regulation, something which could hit those on the bottom rungs of boxing’s socioeconomic ladder the hardest.

Having said that, it might be worth the effort to pass, if only to actually have the commission in existence. With true efforts at reform only coming along once every century or so, the boxing community has to grab at whatever is offered.

The Professional Boxing Amendments Act of 2012 lacks the punch to actually reform the sport to an acceptable degree, but the mere establishment of a national commission is a baby step in the right direction. And, who knows? Maybe some hotshot politician will come along one day, take that national commission, and actually do some good with it.

Hell, waiting for someone to do some good with a national boxing commission is infinitely better than hoping for Bob Arum and/or the Boxing Promoters Association to “get to the bottom” of boxing corruption.