It was an all-around bad night for Golden Boy Promotions as Victor Ortiz (29-4-2, 22 KOs) quit on his stool, claiming a broken jaw between rounds nine and ten of his bout with Josesito Lopez (30-4, 18 KOs) on Showtime Championship Boxing.  The win propels long shot underdog, Lopez to bigger and better things while simultaneously forcing Golden Boy’s Saul Alvarez to look for yet another opponent for his September 15 pay-per-view date. 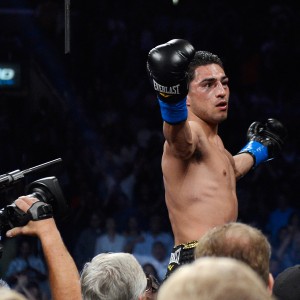 Lopez, a natural junior welterweight, showed true grit and resolve against an obviously bigger and stronger fighter who was fighting, for the most part, with the drive of a fighter one bout away from a major payday.

As the fight progressed, the toll on Lopez’s face showed the physical disadvantage he was facing. But Lopez fought on and managed to hurt Ortiz, fending him off every time Ortiz came in to close the show.

In the fifth round, the action was halted after Ortiz landed a right hand behind Lopez’s head during a tangle-up near mid-ring. If there ever was an out and an easy road to a win for Lopez, it was at that moment. But to his credit and to the credit of referee Jack Reiss, who gently nudged away the DQ option by clearly stating that the blow was merely a glancing one, the fight went on.

With welts and swelling developing all around Lopez’s eyes and his offensive surges becoming less frequent and less intense, the 27-year-old, who had never fought past ten rounds before, seemed on the verge of falling behind permanently, despite his brave efforts.

A combination thrown at the end of the ninth round, though, caught Ortiz square on the open mouth and did enough damage to encourage Ortiz, himself, to call an end to the contest when questioned by Reiss prior to the beginning of the tenth. Ortiz was ahead on all three judges’ scorecards at the time of the stoppage by scores of 86-85, 87-84, and 88-83. The Boxing Tribune also had Ortiz ahead 87-84.

An oddly not-devastated Victor Ortiz smiled in the post-fight interview, claiming a broken jaw, but was hustled away from the ring by trainer, Danny Garcia before he could say something career-damning, ala his 2009 post-Maidana fight comments about not “deserving to go out on his shield.”

An ecstatic Josesito Lopez replaced Ortiz on the mic and declared himself “The Mexican Paul Williams,” willing to fight anyone, anywhere and never quit.

Now the hunt goes on for a replacement for Ortiz in the September 15th pay-per-view opposite Saul Alvarez.

In the televised opener, Lucas Matthysse (31-2, 29 KOs) softened up and then knocked out former super featherweight and lightweight world titlist, Humberto Soto (58-8-2, 34 KOs) with three straight overhand rights at the end of the fifth round.

Technically, it was a corner stoppage prior to the sixth round, but Soto, sporting a blank stare after beating the count at the end of the fifth, was in no condition to continue, especially against a heavy-handed slugger like Matthysse.

The action prior to the end, however, was by no means one-sided as Soto’s superior hand speed and technique allowed him to stay competitive against his stronger opponent.

At the end of the day, though, the naturally stronger fighter won the contest with constant pressure and a dogged attention to Soto’s somewhat fleshy body.

On the internet-only portion of the undercard, Jermell Charlo (18-0, 9 KOs) scored a KO5 victory over fellow prospect, Denis Douglin (14-2, 8 KOs) in a ten-round junior middleweight contest.