The year was 1971 and Erbito Salavarria, the lanky, sharp-shooting Filipino WBC flyweight champion from Manila, had come to face Betulio Gonzalez in the challenger’s hometown of Maracaibo, Venezuela.

Salavarria, who had taken the 112 lb. title from Thailand’s Chartchai Chionoi eleven months earlier, lacked the power to walk through his opponents, so most of his bouts were won on work rate and guile. Salavarria-Gonzalez was a predictably tight affair with both fighters exchanging shots and trading momentum shifts over the course of fifteen rounds en route to a split decision draw. 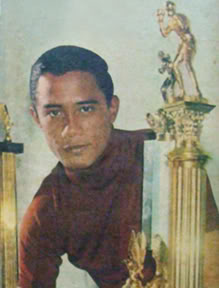 Other than being a solid tussle between two legitimate world class fighters, there was nothing exceptional about the affair until afterwards.

Following the decision, Salavarria’s water bottle was confiscated by suspicious Venezuelan authorities and handed over to WBC officials, who would send a sample of the water to be tested by an independent laboratory. Although Salavarria’s people claimed that the bottle was merely filled with a honey and water mix, the lab results showed the liquid in question to be laced with amphetamines.

The disputed draw was allowed to stand, but Salavarria’s title was stripped from him and offered to Gonzalez. To his credit, Gonzalez would refuse to take the title via boardroom decision, but would later win the vacant belt, anyway, against Filipino, Socrates Batoto two fights later.

Salavarria, other than being stripped of his title, suffered no sanctions, mostly because there was no precedent for what had happened. He would fight on, failing in a bid against new WBC flyweight champ, Venice Borkhorsor, in 1973 before beating Japan’s Susumu Hanagata for the WBA version of the flyweight title two years later. The Manila battler would retire in 1978 with a record of 40-11-3 with 11 KOs.

To this day, Salavarria and his team maintain their innocence, claiming that Venezuelan authorities laced his water bottle with the illegal substance in a bid to keep the world title in Venezuela.

Danish boxing star, Tom Bogs, admitted to using amphetamines in a loss to Emile Griffith in June of 1970 and then a “double dose” in his next fight, a successful defense of his European middleweight title against the UK’s Chris Finnegan.