Current events in boxing only confirm the truth in the saying “The more things change, the more they stay the same”.

It has been a few years since the infamous incident involving the use of plaster in Antonio Margarito’s wraps yet few steps have been taken to prevent that incident from happening again. Despite the outcry, no legitimate universal steps have been taken to mitigate cheating. We must remember that the job of a fighter is to beat his opponent, and as a result they place their own life on the line. Moreover, if a fighter has an unfair advantage it could prove to be detrimental to the health of his opponent. 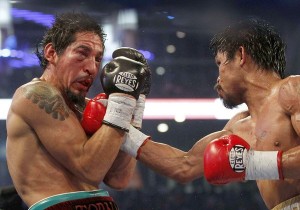 Currently, people are engaging in a USADA vs VADA testing protocol debate. There is nothing inherently wrong with this. This debate needs to be settled by the Nevada State Athletic Commission as they seem to be the leaders in the sport. Though everyone seems obsessed with performance enhancing drugs, there are other issues that need to be addressed.

One of the major issues regarding cheating in boxing is the cutting of weight. Some fighters have the uncanny ability to cut more than 10% of their weight . The sanctioning of a bout in which one fighter outweighs his opponent by more than 10 pounds is unfair. So far only the IBF has taken action to prevent this by requiring another weigh in the day of the fight that disqualifies fighters that gain too much weight. It is suspected that Chavez Jr. weighed more than 180 lbs the day of his fight with Andy Lee. The twenty plus pounds gained by Chavez Jr. appear to be the edge that gave him the win.

Another issue is hand wraps. The public is aware that plaster could be inserted into hand wraps to give a fighter an edge. However, it is not as well know that an experienced hand wrapper can turn the tape and gauze into a cast that protects a fighters hands as well as give him the ability to do more damage. Some of this wrap work is consistent with commission rules and some is not.

When Manny Pacquauio faced Antonio Margarito there was an alleged incident accusing Pac of illegal hand wraps. In particular, Garcia wanted to cancel the fight because the wraps Manny was wearing, in which non-medical tape was rolled up into thick cords between the knuckles, were highly questionable. Perhaps this explains how Manny was able to break Margarito’s eye socket? The most troubling aspect is that the commission officials refused to address the illegal nature of the wraps and allowed this to happen.

Unless true reform is sought in boxing we will undoubtedly experience more of the same. We will continue to see the boxing establishment place a fighter’s life and health on the line when they place them in the ring with an opponent that cheats their way to victory. We must not only work to protect the integrity of the sport but also the well being of fighters.