If you’ve never seen Rounders, look for it on Netflix or whatever.

It’s a great tale. Matt Damon plays a hotshot law student with a gift for poker.

Without spoiling the plot, Damon’s character plays it to the limit and rises, falls and rises again. Among the cast is a friend, mentor and ultimately antithesis who earns his living in the game by playing it safe and simply ‘grinding out a living’ on low limit tables. 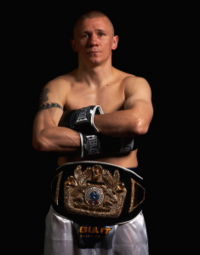 Somewhere in that plot I found the perfect metaphor for a relatively low interest fight happening this weekend in Poland.

Which isn’t necessarily all that bad at all.

Jackiewicz is a grinder. He earns his living fighting. He has fought for a world title. He lost. Annoyingly (for him) he lost to the same man he had beaten to the EBY belt 18 months previously, Jan Zaveck.

Kell stopped him in 6. The pole took a chunk of punishment.

And Brook is a bit special.

But Rafal has won 3 since.

The pole took a decision off of Rodriguez back in 2009. And Rodriguez has had his name in the frame latterly especially after a tie and a win over Rafal’s countrymen and fellow ring warrior, Pawel Wolak.

They make ‘em pretty rugged in Poland you know!

Well, Pasqua hasn’t really been in with any serious quality, has lost a bunch and may not ever even get to the top of of the European crop. But he is there to fight. To earn money. A living.

That’s what fighters do. Both of them. All of them.

So while this might not be a bill topper. It might not even lead to much. Give them credit.

They are there to grind it out.

And hope that somewhere, somehow, somewhen, a shot comes calling for the big time. The high rollers table.

Sometimes the best games in town are where the stakes are low and the men don’t drip with gold and diamonds but with the same blood and sweat as from the last fight, last month.

If you get the chance, it might be worth watching. Grinders matter. Big time players count on them when they catch a bad beat and need to start again.