Heavyweight contender Tomasz Adamek (46-2, 28 KO) gets back into the ring on September 8 from his regular home front of the Prudential Center in Newark, NJ.  Fresh off a controversial win over Eddie Chambers in the last Fight Night card on June 16 Adamek will get back into action against an opponent TBD. 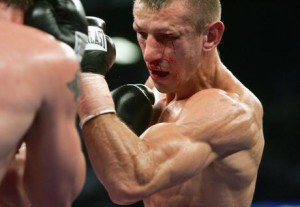 Adamek and Chambers met two weeks ago looking to get back into title contention in a well-regarded match of talented, but under-sized heavyweights.  Chambers tore a muscle in his left arm in the first round forcing him to fight one handed the rest of the fight.  Despite the limitations, Chambers appeared to land more successfully but Adamek was more active and took the decision.  Scores at ringside were split but all three judges saw it for Adamek including a ridiculous score of 119-109 from Alan Rubenstein.

Now Adamek moves forward looking to get back to his old ways of fighting three to four times  a year in front of the supportive Polish crowd he draws in North Jersey.  The fight will not be a re-match with Chambers, who needs surgery to repair the torn bicep.

Adamek (45-2, 28 KO) has won titles at light heavyweight and was the unified Cruiserweight champ.  He has wins over Paul Briggs, Steve Cunningham, Andrew Golota, and Chris Arreola.  His two defeats are to Chad Dawson at light heavyweight by decision and he was stopped by Vitali Klitschko.

The fight September 8 currently does not have an American TV, but in the past Adamek’s promoter Main Events has not been afraid to do independent PPV broadcasts for Adamek.  The majority of the money generated will be from two revenue streams.  Adamek draws well in Newark and should have a decent crowd on hand.