Atlas Arena, Lodz, Poland– At this point, it’s a cliche to say that watching a faded Roy Jones Jr. in the ring at 43 years of age is a sad affair. The hand speed is no longer super human, the reflexes are gone, the legs are stiff, and punch resistance is growing weaker with each performance. 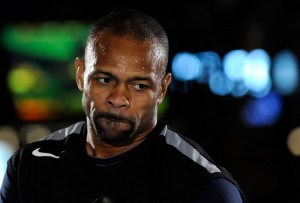 With this in mind, Roy Jones was still expected to cruise to a victory against 29-year-old, Pawel Glazewski (17-1, 4 KOs), a late substitute for fringe light heavyweight contender and accused pimp, Dawid Kostecki.

Instead, Jones survived a sixth round knockdown and a late rounds surge from Glazewski to barely get the controversial ten round split decision nod over the reigning Polish international light heavyweight champ.

The former 4-division world champ had the first half of the bout fairly under control with a decent enough jab and the threat of a follow-up right hand. But Glazewski eventually bulled his way inside and, at the end of the sixth round, landed a solid left hook that made Jones’ legs freeze up and led to the first and only knockdown of the bout.

Jones seemed unfazed and unhurt following the knockdown, but the slightest taste of blood gave the younger fighter some added confidence and made for a very competitive final four rounds. With the confident Pole pushing forward and Jones doing his best to score with smart counters, the last part of the bout was close and fairly hard to score.

After the contest, Jones made fight fans everywhere groan in unison with a promise to keep on fighting and the following quote: “I still think I can be cruiserweight champ.”