ESPN’s Dan Rafael reports that Lucian Bute (30-1, 24 KOs), fresh off of getting his ass kicked by Carl Froch (29-2, 21 KOs) in five rounds back on May 26th, will exercise the rematch clause in the contract of that fight. Both men, however, intend to take interim fights, either as a tune-up or as prelude/springboard to greater things in the meantime. 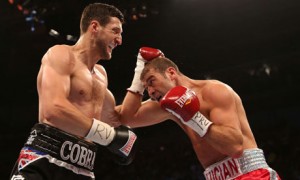 Bute caught a couple of good shots from Froch in the second round of their first contest, granting an advantage to the Englishman that he did not relinquish, pummeling the Montreal-based Bute in a one-sided beatdown more consistent with an ESPN contender-vs-tomato-can matchup than a championship fight. Froch didn’t just win Bute’s IBF belt at super middleweight, he took his lunch money in the process.

This does leave open the question of what each man will do for his interim contest; for Bute, taking a fight against far lesser competition runs the risk of lulling him into a false sense of his own skills again, while for Froch, he has far more flexibility to stay busy, having already proven his chops in the ring as Super Six runner-up and now current IBF titleholder.

Who will those interim fights be against? Looking at the IBF rankings, the top guys are (in order) Adonis Stevenson, Edwin Rodriguez, Thomas Oosthuizen, Bute, and James DeGale, with Mikkel Kessler and Kelly Pavlik lurking just below that top five. Any one of those guys (besides Bute himself) would make for an excellent opponent for Froch or Bute alike, and a Bute-Stevenson matchup would be a Montreal superfight of sorts.

The Boxing Tribune will keep you posted as developments unfold in this story; for now there is no official fight date set, merely an agreement based on a contract clause for that Froch-Bute rematch.

Fox Doucette covers Friday Night Fights for The Boxing Tribune. His weekly column, The Southpaw, appears on Thursdays. Fan mail, hate mail, and Montreal steak can be sent to beatcap@gmail.com.