Yusaf Mack returned to a Philadelphia ring for the first time since 2008 and won his main event with Sabou Ballogou at the Pennsylvania Convention Center Saturday night. Mack captured a 6-round unanimous decision, but had to weather a mid-fight storm from the West African slugger before registering his 31st victory. Ballogou’s rally wasn’t as dramatic as in his last fight (against Derrick Webster), but anyone who saw that near-KO braced themselves for a possible repeat. 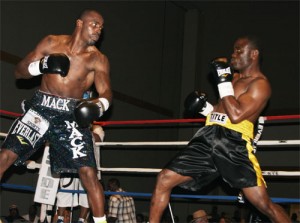 Mack started the fight in complete control, using a long jab against the pressing southpaw, who now fights out of France. When Mack would miss with the left or needed to reset his position after one of Ballogou’s charges, Mack would stutter-step his way to the side where his jab could pick at the free-swinging French-based fighter.

Mack took the first round and kept it going in the second until Ballogou whacked the West Philadelphian with a solid low blow. Mack tumbled to the canvas from the foul, near a neutral corner. A wincing Yusaf popped right up and hopped around, trying to recover from the shot.

Once the action resumed, Ballogou ran right in, but Mack remained in charge. The incident however, changed the fight’s direction – at least for a while.

In round three, Ballogou went for the upset, pinning Mack against the ropes and looping wide bombs toward him. A few found home and rattled the favorite. It was more of the same in round four, with Ballogou charging in and going for broke. At one point Sabou tagged Mack with a hard left that hurt him. Yusaf sagged against the pad in his own corner while Ballogou let the punches fly. The Frenchman did his best to one-up his last performance, but Mack kept his guard tight enough to avoid further danger. But this was a great round for Sabou. After four rounds, the fight was even on my card.

Beginning in round five, Mack used his deeper experience to stay out of trouble. Ballogou kept coming, but may have been slightly gassed from all the punching he’d done in the two prior rounds. Mack pushed his difficult foe further toward fatigue with an excellent body attack. Going downstairs also helped to lower Ballogou’s guard, creating some nice opening upstairs. Mack slammed a few hard rights to the head, but couldn’t really hurt the rolling rock before him. He did pull ahead on the cards however.

When referee Blair Talmadge brought the fighters together at ring center for the start of the sixth and final round, Ballogou did not want to engage in the traditional glove-tapping. Talmadge forced the issue, and the fighters finally tapped. After this, you had the feeling round six would be a war.

Ballogou charged at Mack swinging wildly, but Yusaf was all warmed up and in the zone by then. He stutter-stepped his way off of Sabou’s train tracks and fired the jab at him. For the entire round, Mack looked like an old pro, picking, moving, and firing power shots.

By the end of the round, Mack was landing at will and hurting Ballogou with right hands. The seasoned old pro closed the show, and nailed down the fight on points.

All three judges scored the fight for Mack. Richard Hopkins Jr. and Dewey LaRosa had it 59-55, while Lynn Carter scored it 58-56.

The win raised Mack’s record to 31-4-2 with 17 KOs, and kept him in the hunt for another run toward the title. Prior to the fight, Yusaf said that his goal was to land a fight that would help return him to the number one spot among the light heavyweights, a position he held last summer.

Ballogou, fighting for just the second time in the US, slipped to 8-6 with 4 KOs, but once again proved himself a tough and dangerous opponent.

In the evening’s main supporting bout, West Philly featherweight Eric “Outlaw” Hunter made a resounding comeback after a 19-month layoff. His opponent was Jason Rorie, the owner of a long losing streak, but the kind of fighter who is making his career as a test for young talent or fighters at the crossroads, like Hunter.

Before probably the biggest cheering section in the house, Hunter, clearly anxious to fight again, stepped right in and went to work. From the start, he looked fast, sharp, powerful and cocky. He smiled to himself as his punches found their mark, knowing he was nearing the finish line.

However, Rorie, of NC, was not a shrinking violet against Hunter. He pressed forward from the opening bell and threw tons of punches. Once in a while, he’d land on Hunter, but most of the time the Philadelphian managed to slip, block or lean away from everything coming his way.

In round two, Rorie continued to be the aggressor. About halfway through the round, he trapped Hunter on the ropes and unloaded. Once again, Hunter slipped most of it, but a few of the shots trickled through his defense.

Finally Hunter worked his way off the ropes and maneuvered the action to the other side of the ring. Rorie landed a clubbing left hook a moment before Hunter ripped a right-left combination to Jason’s body that buckled his knees. An instant later, a sharp Hunter left hook landed and Rorie crashed to the canvas. He climbed to his feet and headed back into the slaughter.

Hunter went right in for the kill, landing a withering right hand and followed with two crushing left hooks. Rorie crumbled to the floor on his back, and referee Shawn Clark didn’t bother to count. The time was 2:38 of the second round.

Before the fight Hunter, 16-2 (9 KO), said he hoped the fight with Rorie would jump start his erratic career. The showy KO was definitely a good start. Rorie continued his slump, with this his ninth straight loss, and fell to 6-16-2 (3 KO) overall.

The remaining four professional bouts offered were all scheduled for four rounds.

A busy and accurate Tim Witherspoon Jr. rebounded from his loss in January with a nice unanimous decision victory over a weary Cassius Clay. Tim Jr., son of the former two-time heavyweight champ, breezed through the first three rounds before Clay showed some signs of life in the final three minutes. But Clay’s rally was little more than a blip, never threatening to change the course of the junior welterweight bout. Although Witherspoon lost the final round on my card (and two of the judges), he was still the clear winner when the bell sounded to end the fight.

Judges Richard Hopkins and Lynn Carter scored 39-37; Dewey LaRosa saw it a 40-36 shutout for Witherspoon, 7-2-1 (2 KO), who is already scheduled to fight again on July 28th in Georgia. Clay remained winless at 0-5.

Philadelphia junior middle-weights Vaughn Anderson, Philadelphia (red trunks), and Greg Jackson, Vineland, NJ (black trunks), brawled for four entertaining rounds in their preliminary contest. Jackson was having a pretty good round one before Anderson, looking for his first pro victory, floored him with a long right hand. The punch won Anderson the round, but Jackson got up and won the remaining rounds in my opinion. However, the fight was a war and went back and forth between the two.

Jackson, making his pro debut, threw wide sweeping shots at Anderson. In the second Greg landed hard with both his left hook and right hand, but Anderson fought back well. The fight was close, but Jackson sealed it in round four when he hurt Anderson late in the round. The question was whether Jackson had done enough in the minds of the judges to overcome the knockdown. Two of them felt he had. Hopkins and Carter scored 38-37 for Jackson, while LaRosa favored Anderson, 38-37. The decision made Jackson 1-0, and Anderson  0-3.

In a wild battle of junior middleweights both fighting pro for the first time, Orlando Lewis took a four round unanimous decision over John Frazier of Ohio. Lewis, Vineland, NJ, dropped Frazier, once in round two and again in the third, and pounded his opponent’s body all night long. But still the fight was a slugfest, with Frazier fighting and swinging hard between trips to the canvas. Lewis won all four rounds on my card of 40-34. Lynn Carter agreed with my score, while LaRosa tallied 40-35. Hopkins had it the closest at 39-35.

The pro portion of the show began with major fireworks as Saud Clark pounced on Kareem McFarland immediately. Clark dropped McFarland three times for an automatic stoppage in round one. The time was 2:42. Both Philadelphian’s came into the fight with identical records of 1-0 (1 KO).

The card was promoted by James Shuler Boxing Promotions, Buster Custus, promoter, and was the just the fifth in-Philly show of 2012. A crowd of about 400 attended.