You may have noticed this site devoting a fair bit of time to the saga of Vanes Martirosyan last week, keeping up on his illusory fight with Ryan Davis that turned out to be a mirage. Your columnist reported the news as it broke, playing at being a journalist and not just that blowhard who makes dick jokes and broadens the thesaurus in his repeated efforts to describe journeyman fighters without over-using any one descriptor (I can’t help it, the Contadina joke never gets old.) 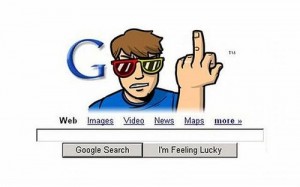 There’s a simple reason why. Here at the Tribune, we’re spanning the globe, absorbing ourselves in every piece of news that comes our way, keeping ourselves updated to provide you with the very best boxing news and feature coverage on the Internet. By the gods, we do it better than anyone, week in, week out—if you could see behind the scenes, you’d see a dedicated team of guys who get along like a bunch of strangers at a bar who all happen to be rabid hardcore boxing fans. It’s like a set piece from a Damon Runyon tale.

There is, however, one small problem with going so far above and beyond to bring you the constant variety of pugilistic sport. For every article that crosses our inboxes about the developing events in a fight (the Martirosyan-Davis fight being Exhibit A), there are twenty more that are useless, worthless shill pieces clearly penned by a promoter and having a news value of absolute nil.

I’m not the type to constantly check my cell phone whilst on a date. I refuse to be that asshole. Imagine my surprise, then, as last weekend, enjoying the company of a friendly face for dinner and companionship, my phone deluged me with a barrage of junk only tangentially related to the fighters who form my specific beat here at the Tribune. She excused herself to the powder room for a few minutes…and I had a chance to check what had come in during the preceding few hours.

I got ten pieces, written with various degrees of literacy (from minimally literate down to “you flunked out of fourth grade, didn’t you? Who gave you a writing job?”), about Lucian Bute and Carl Froch in a fight that won’t happen until March 2013 at the earliest. I got back-and-forth promoter banter between Randall Bailey and Devon Alexander. I got someone calling John Molina a punk, and that someone using the utmost gravity to impress upon an audience, in an article that was intended for the Google News aggregator, that Mr. Molina was indeed a punk, this having something to do with his refusal to fight Henry Lundy again, even though Molina barely escaped with his hide intact and is frankly just engaging in smart matchmaking by staying out of a fight in which he would be in real jeopardy in the rematch. The only way that rematch makes sense is as a title unification at 135, and neither Molina nor Lundy are yet champions.

Speaking of Hammerin’ Hank (and if you give Lundy a microphone, he’ll speak of Hammerin’ Hank until the cows come home then talk the cows’ ears off until the milkmaids show up), four different “news outlets” were all over Lundy’s Friday Night Fights training camp, all reporting copy desk filler like Lundy was Muhammad Ali and they were there to hear the word of Allah Himself (yes, Allah, what with Ali being Muslim and all, just work with me here.)

The overarching takeaway, however, was that the boxing media simply isn’t very good. If I have to listen to Gabriel Fucking Montoya puff his goddamn chest out about how bloody important he is (he makes Keith Olbermann’s Edward R. Murrow act look humble), if I have to see ESPN’s lawyers salivating because Generic Writer No. 55 ripped off Dan Rafael word for word, and if I have to listen to some hack in Poughkeepsie pretend he’s Grantland Rice one more time (news flash, guy, you’re not Grantland Rice, you’re not Jimmy Cannon, you’re not Frank Deford, just shut your damn mouth, and this applies to at least five dozen boxing scribes out there), I might just scream.

Sure, other sports have terrible reporters. Chris Broussard writes about the NBA and drives me batty every time I hear his voice. Gregggggg Easterbrook is, and will always be, a haughty dipshit (yes, I stole that line from Drew Magary at Deadspin, and no, I’m not a plagiarist, I cite my sources) writing about the NFL. Matthew Berry manages to write about fantasy sports with the kind of hey-look-at-me self-importance that is found only in utterly trivial people and three-year-olds demanding a cookie for having just made potty without smearing shit all over the wall.

Boxing just attracts an extra-special crowd of no-talent hacks and nobodies, guys with curriculum vitae that look more like rap sheets by association. Where is our Bob Ryan, where is our Will McDonough, where is our Bill James? Chris Ryan at Grantland does awesome work writing about the Sweet Science, probably because he isn’t a boxing writer—he’s a sportswriter, and a damn good one, who happens to write about boxing not on a promoter’s dime, but on the dime of Bill Simmons’ great big vanity project. The guy’s first loyalty is to his craft, not a media buffet table with shills stuffing their faces.

Does all of this have a point? Probably not, besides what you already know on account of being here. If you want news and information about boxing, you don’t go to the shills. Turn your attention to the Boxing Tribune. We read other writers’ crap so you don’t have to. When we say something’s news, it’s because we think it’s news, not because some promoter or manager thinks it’s news and pays us to parrot their company line. Food tastes better when you don’t have to eat it out of Bob Arum’s ass.

Fox Doucette covers Friday Night Fights for The Boxing Tribune. His weekly column, The Southpaw, appears on Thursdays. He could’ve made this article about 35,000 words if he’d really been keeping count of all the offenders, but that’s Paul’s job on Mondays. Fan mail, hate mail, and death threats can be sent to beatcap@gmail.com.