Usually fighters wait until they are millionaires before they start becoming jaded and disinterested in the fans who pay their salary.

Adrien Broner, anointed heir to the Floyd Mayweather Jr. legacy, is once again showing himself to be well ahead of the curve when it comes to career progression. At 21, he had already won his first paper world title (WBO super featherweight) and received his first putrid gift decision over a tough former champ (Daniel Ponce De Leon). Now, at 22, Broner has crossed into the “I’m not going to give a rat’s ass about making weight” category– a good 6-7 years before self-absorbed, superstar pugs usually decide that they should be the ones making the rules. 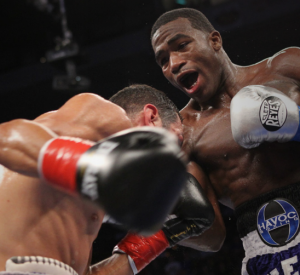 Broner came into Friday’s weigh-in for the next day’s Vicente Escobedo bout 3.5 lbs. over his 130 lb. limit.

What this means in boxing talk is that: 1) He was likely busting his ass two or three days before the weigh-in to get to the super featherweight limit and/or 2) He likely passed into fight week as a full-fledged junior welterweight, just waiting to explode into a welterweight by fight night.

But so indifferent was Broner that, when given the chance to salvage the fight by not re-hydrating past 140 lbs. on Saturday morning, he blew that off as well, showing up at 143 lbs.

Rather than lose out on an HBO date and face the repercussions of an angry Cincinnati live gate, Team Broner did the only thing they could– toss money at Escobedo. Eventually, they found the right price, reportedly $250K, and the fight went ahead as planned, provided Broner would not exceed 148 lbs. by the time of the fight.

It was reported that Broner entered the ring at 147 lbs. while Escobedo entered at 142. While five pounds is not all that much difference, remember, Escobedo likely busted his ass to make weight while Broner walked into both weigh-ins leisurely disregarding the limits and without even trying to sweat off the excess weight.

Broner, who is much more talented than Escobedo and likely would have beaten him at any weight, sported the huge advantage of being 100% fresh. During the fight, he made it look as though Escobedo was battling a brick wall at times.

But maybe Broner inadvertently stumbled onto something positive, something educational from his disgusting lack of professional ethics.

Why not explore a return to same day weigh-ins?

Surely, I wasn’t the only one to notice the absurdity of two welterweights fighting for a super featherweight title, right? Most modern stars these days are fighting well below their natural weights and, while that may have been an awesome legal cheat for a long time, the whole set-up is pointless when everyone is trying to pull the same stunt.

Of course, some are better at it than others.

Julio Cesar Chavez Jr. is a cruiserweight who owns the WBC middleweight title. His improving skills take a back seat to his ability unpack and pack 20-plus pounds on to his frame before entering the ring. Manny Pacquiao has looked powerful and energetic for most of his stint at welterweight because he’s been showing up as a welterweight on fight night ever since he was a super featherweight. Jorge Arce looked like a mini-juggernaut from junior flyweight through bantamweight, in part, because he was showing up to his fights as a featherweight. And who could forget a middleweight Arturo Gatti retiring and nearly killing Joey Gamache in a 2000 junior welterweight bout?

A return to same day weigh-ins would even out the playing field and prevent much of this weight manipulation.

Boxing is full of people running scams and planning cheats, so expect some to simply look for another way to gain a physical advantage. But lost revenue and network wrath from last minute cancellations would eventually take care of those slow on the uptake.

But forget about it. The chance of lost revenue is what will prevent the return to the same day weigh-in. After all, lost revenue was the reason the weigh-in was changed in the first place.

In 1983, Michael Spinks and Eddie Mustapha Muhammad were set to meet in a rematch of their 1981 light heavyweight title bout. However, Muhammad’s inability to make weight on fight night and Spinks’ refusal to look the other way forced a last minute cancellation and cost a lot of important people a lot of money.

The sanctioning bodies, acting like the good puppets they are, immediately went to “reform” the sport on behalf of the money men. Heaven forbid they lose money because of failed weigh-ins and “uppity” fighters who refuse to enter the ring at a physical disadvantage.

Health and safety issues were cited as the catalysts for the change, but no real studies were conducted or referenced to support their decision and, given that the move wasn’t made until shortly after a major fight had to be cancelled at the last minute, it was obvious that the entire deal was about potential lost revenue.

But like most things in boxing, short money and cronyism take precedence over the best interest of the sport. So, until someone cares enough to actually do something positive for boxing, welterweights fighting for super featherweight titles and cruiserweights disguised as middleweights will be the norm. And arrogant little monsters like Broner and Chavez Jr. will continue to rule the roost on boxing’s tree of woe.

You can email Paul at paulmagno@theboxingtribune.com or watch as he tries to wedge himself into every known podcast in the Universo Pugilistico. Paul is a full member of the Burger King Kids’ Club, a born iconoclast, and an ordained minister in the Universal Life Church.