This is as good a time as any to give Paul Williams one more nod of recognition and one more gesture of respect. 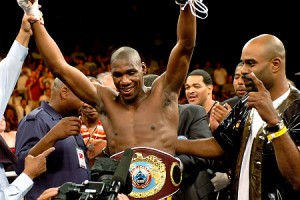 Williams, who was paralyzed from the waist down in a motorcycle accident in May, is out of the hospital and apparently adapting well to his new circumstances. According to trainer and manager, George Peterson, the former two-time welterweight champ took in a movie over the weekend and even attended a local fight card. Williams is also due to attend the September 15th Saul Alvarez-Josesito Lopez card in Las Vegas, a card he was supposed to headline with Alvarez before his career came to a tragic end.

Looking back on his time in the sport, the lanky southpaw was the type of fighter boxing fans have always claimed to want– an all-action American fighter who would fight anyone, anywhere. Known as one of boxing’s most feared warriors, Williams had to settle for tough fights against other similarly avoided challengers, meeting six fellow southpaws in his nine fights after beating Antonio Margarito.

But let’s also remember those media scumbags who tore into Williams mercilessly and worked overtime to diminish his achievements. Now, of course, they shed virtual, on-line tears for the fallen warrior, but hypocrisy is to be expected from those who routinely sell out their integrity for money and favors.

In any case, Williams is out and about, going to therapy, and still vowing to beat the odds to make a full recovery. Good for him. He deserves nothing but the best.

Amid the hand-wringing over Adrien Broner’s lack of professionalism and the hanging of Al Haymon in effigy, the real villains in the Adrien Broner fiasco got off scot-free.

Saturday, while Team Broner was attempting to lure Vicente Escobedo into a physical mismatch, the Ohio Athletic Commission, ostensibly in charge of the safety of all fighters competing under their supervision, sat idly by with thumbs inserted firmly in their collective rear ends.

Granted, Ohio does not handle a lot of big-time boxing action and commission officials, even in the “strong” commissions, tend to be just slightly more competent than double-naught spy, Jethro Bodine. But, still, it doesn’t take a genius to see something wrong in one side of a prizefight tossing cash at the other side for the right to disregard  a potentially fatal flaunting of the rules.

The Ohio Athletic Commission reminded us of the sad fact that everyone in a position of boxing authority is a worthless shill. Whether it be state commissions or the sanctioning bodies, these people are only there to take money and give the real power brokers the appearance of legitimacy. When push comes to shove, they bend over quickly and willingly to those really in charge.