Rapidly rising junior welterweight prospect Mercito “No Mercy” Gesta (25-0-1, 13 KOs) looks to continue his winning ways as he headlines ESPN2 Friday Night Fights against twice-stopped Ty Barnett (20-2-1, 13 KOs) at the Texas Station Casino in Las Vegas. The co-feature, a good-looking TV bout sure to entertain, gives fans Cleveland’s own Mickey Bey Jr. (18-0-1, 9 KOs) taking on Robert Frankel (30-12-1, 6 KOs), a man so prone to cuts that Frankel may start bleeding during the ring introductions. 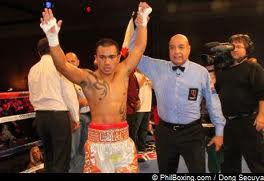 Mercito Gesta is looking to become the new Next Big Thing from the Philippines around the welterweight level now that Manny Pacquiao seems to have been hung out to dry by the Bob Arum meat grinder. Gesta is 24 years old and has so far followed a respectable prospect’s track, fighting guys who pose no threat to good up-and-coming fighters but who are far from being complete fall guys. In particular, Gesta owns two wins over Cristian Favela; a fan of FNF can look at Favela’s Boxrec and see a litany of the mid-level guys who have populated ESPN2’s airwaves. With a win over Favela, Gesta joined guys like Mauricio Herrera, Jessie Vargas, Art Hovhannisyan, Patrick Lopez, Sharif Bogere, and even Danny Garcia among the 31 losses Favela has sustained in his career.

All this is to say that Mercito Gesta is exactly the kind of fighter who tends to populate the fights on the Worldwide Leader. As if to illustrate his showcase-prospect status, he’s in with a guy in Ty Barnett who frankly poses no threat to anyone. Barnett is ranked 192nd by Boxrec at 140 pounds, having been knocked out by prospect Andrey Klimov (who is now 14-0) and by Juan Santiago, who was 9-2-1 at the time of their fight but has since evolved into a gatekeeper, currently sporting a 13-9-1 record including stoppage losses to Vernon Paris, Eloy Perez, and Marvin Quintero.

Will the fight be competitive? Probably not, but if it is, that will say more about Mercito Gesta’s weaknesses than winning such a bout would say about his strengths. This is a look good on television type of fight for the Filipino as he looks to get his name in front of American audiences and continue a quest to become the next Manny Pacquiao. Far worse has been paraded before our eyes on basic cable.

In the co-feature, we have Mickey Bey Jr. Bey was to be an Olympian for the Athens Games in 2004, defeating Brandon Rios in the qualifying trials, but a bout with pneumonia sidelined him and ended his Olympic dreams. Now 18-0-1 as a pro, the Cleveland native looks to do in the pros what eluded him in the amateurs; reach the sport’s highest level as a world champion. Bey has been on Friday Night Fights before, beating the snot out of Alejandro Rodriguez last July 1st in a fight that ended up getting overshadowed by the Ali-Terrell-like main event between Sebastian Lujan and Mark Jason Melligen, one of the most brutal knockouts of ESPN2’s excellent 2011 season. This does not, however, take away from the impressive display of power shown by the Cleveland native in that co-feature.

Standing in Mickey Bey’s way is another man who had a memorable performance on FNF last year, albeit for a completely different set of reasons. Rob Frankel fought John Molina only a week before Mickey Bey’s appearance, on June 24th. In that fight, Frankel sustained multiple cuts from the punches of Molina, and when the fight was over, stopped as a result of those cuts, his right eye looked like a treasure map with the spot marked by criss-crossed nasty gashes that looked like Frankel had fought a bare-knuckle bout with Edward Scissorhands. So much blood flew from the face of Frankel that Joe Tessitore famously remarked that his dry cleaner thought he was a hit man from all the blood that landed on his suit.

It will be interesting to see if the unbeaten Mickey Bey can handle a fighter who, apart from the tendency to bleed like a 28 Days Later zombie, brings very little actual punching power to the party. Frankel has only six knockouts in 43 pro fights; if only his wins are counted, he still boasts only a 20% KO rate. Bey should be able to work on the outside against the shorter Frankel (Bey is 5’9, two inches taller than his opponent), and if he is able to stick his jab and get good torque on it, he should have little trouble keeping Frankel off him. Like the main event, the unbeaten fighter must not only win, but win decisively by knockout. The main obstacle to this aim is less likely to be the guy in front of him as it is to be the rule that says a fight stopped on an accidental foul is a no-contest if it does not go the first four full rounds. In any case, the smartest bet here is for blood to play a prominent role.

Friday Night Fights airs on ESPN2 and ESPN3.com on August 3rd at 10 PM Eastern/7 PM Pacific. The Boxing Tribune will have a full recap of the night’s televised action, including any swing fights that make air, following the conclusion of the broadcast. Stay tuned—we’re the worldwide leader in covering the Worldwide Leader.

Fox Doucette covers Friday Night Fights for The Boxing Tribune. His weekly column, The Southpaw, appears on Thursdays. Fan mail, hate mail, and bets on who’d bleed out first in a fight between Rob Frankel and David Diaz can be sent to beatcap@gmail.com.