If you ever try pissing into the wind, you’ll likely end up with little more than a face full of piss.

The Spring of 2012 was characterized by a focus on performance enhancing drugs (PEDS) and their use in boxing. Supported by the emergence of the upstart Voluntary Anti-Doping Agency (VADA), fighters were suddenly feeling compelled to submit to testing above and beyond the scope of what is normally mandated by the state commissions. 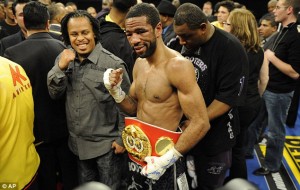 In the heat of the testing fervor, two high-profile bouts had to be canceled when Lamont Peterson showed high levels of testosterone prior to his May rematch with Amir Khan and Andre Berto tested positive for the steroid norandrosterone a month prior to his return bout with Victor Ortiz.

Both Peterson and Berto were caught under VADA testing, but it’s important to point out that it was done beyond the scope and supervision of either bout’s respective state commissions. As such, neither the Nevada nor California commissions could take any real action, even had they wanted to.

Other than the loss of a big-fight purse and a mostly token mandatory appearance before the state commission prior to being re-licensed, neither fighter suffered any real, material damages from the failed tests. Their reputations as sportsmen did take some heavy hits, but boxing is not exactly polo in terms of high-brow ethics, so it won’t take long for fans to welcome both fighters back into the fistic community.

Now, just three months after the failed PEDs tests, the topic that dominated social media and sent some scribes into a TMZ frenzy of closet-rattling, rumor-soaked “outings,” has died down and boxing is, for the most part, back to business as usual.

Lamont Peterson was recently reinstated by the IBF as their junior welterweight world champion after an initial decision to strip the fighter (The WBA had earlier returned their 140 lb. belt to former champ, Amir Khan). Andre Berto, still inactive without a bout scheduled, is making business plans for the future, recently aligning himself with rapper 50 Cent’s TMT Promotions. Both fighters have maintained their innocence against cheating claims and, without a centralized authority to actually conduct a formal hearing, fans are left to believe whatever they choose to believe regarding the fighters’ assertions.

There’s a reason that boxing, the dirtiest of all organized sports, has gone through so few fundamental changes over the years despite having, by far, the greatest amount of travesties and controversies.

The system, from top to bottom, has been set up to support corruption and when winds of change occasionally do start swirling around, it knows how to shut things down.

In the low-pay internet age, the boxing media has found itself under the virtual (and often literal) ownership of boxing promoters and managers content on maintaining the status quo. Now, major sites are almost completely funded by those they cover and the news gathering process has become dependent on publicist press releases and carefully doled-out access from management-types.

Even those who wet their slacks in self-congratulation for their journalistic chops, are purely partisan in their efforts, looking to settle old scores with fighters or promoters while coddling “friendly” supporters and informants.

The real battle in 2012 should’ve been the establishment of a truly independent national commission, but that’s ugly business that would step on every power broker’s toes and, in any case, it’s nowhere near as glamorous (or as safe) as outing a single fighter as a drug cheat.

As this writer wrote last May, in the midst of the PEDs fervor, “…independent testing, without the aid of some sort of legally-binding infrastructure is pointless. A little along the lines of swatting at flies on your stove, but leaving the 5 lb. sack of pig dung in your kitchen.”

For those who know the sport and understand the pathologies of those who run it, it was clear where all this PEDs reform talk was going. It was going right into the recycling bin, historically reserved for rotten judges, bumbling referees, and every other “black eye” threatening the legitimacy of the sport. Time will pass, people will forget, and the offending parties will be dusted off and returned to their original places in the boxing world.

The post Pacquiao-Bradley fight controversy should’ve opened some eyes when Bob Arum comically called for an inquiry into the fight’s awful decision and then took aim at curing boxing’s ills with the establishment of a national commission, run by many of the same old cronies who can’t even run a state commission. No reform is possible with the foxes guarding the hen houses. When boxing’s money men are in full control of every aspect of the game, why should they let anything be changed at all?

There is a real and dangerous power vacuum in the sport of boxing and all the pissing in the world, even if pushed real hard, won’t change a thing.

Boxing is beyond minor surgical repairs here and there. It needs a complete transplant of just about every vital organ. True reform will be a bloody, nasty endeavor.

But don’t expect an Us vs. Them clash of good and evil in this atmosphere. None of the hot shot pseudo-journalists currently packing on winter weight at promoter-paid media buffets have the guts to truly address boxing’s real issues. The truth is that they’ve learned their roles as cogs in the machine and don’t want to risk losing the comforting warmth and hum of boxing’s power source.