Did we, in the past year, forget that Nonito Donaire (29-1, 18 KOs) was a top-ten pound-for-pound fighter? To hear the boxing media tell it, you’d think Donaire had just been knocked out in his last three fights, what with all the doubts those media members have expressed as to the Filipino Flash’s ability. Not that Toshiaki Nishioka (39-4-3, 24 KOs), his opponent for a junior featherweight unification contest on October 13th, is a tomato can (he isn’t, having stomped the division’s best into dust during his eight-year, 16-fight winning streak), but people seem to be treating Donaire as if he’s a strawweight fighting a heavyweight in there. 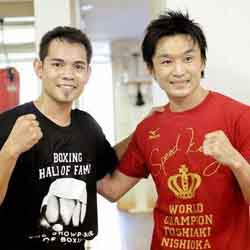 The reason why should be self-evident to anyone who follows the piggies at the trough in the boxing media these days. Donaire dared to stand up to Bob Arum’s bullshit at Top Rank. Even though Donaire finally caved, realizing that his career was held by the balls in a pair of Vise-Grips wielded by Arum, hell hath no fury like an angry mob whose puppet master got crossed.

Let us disabuse ourselves of this notion. The only crime Nonito Donaire is guilty of is choosing an opponent in Omar Narvaez who decided, with no participation on Donaire’s part in the decision, to fight like a frightened turtle for the twelve rounds they threw down. Even Donaire himself grew bored, since it is all but impossible to land even the most elementary of counter punches, much less lead the action with your own offense, if your opponent does not move his hands. Then again, one can hardly blame Narvaez for coming up Number Two in that fight; seeing what Donaire did to Fernando Montiel would be enough to put anyone off the idea of testing his power. Still, to hear the scribes tell it with their revisionist history, what they were calling “the greatest left hook ever” when it crashed home is now being recast as some sort of lucky fluke.

Of greater concern should be Donaire’s history at 122 pounds. Yes, he’s got two of the four world title belts, and yes, he did soundly defeat both Wilfredo Vazquez (no matter how badly judge Ruben Garcia was tripping balls awarding the fight 115-112 to Vazquez) and Jeffrey Mathebula. But at 122, Donaire has not uncorked the kind of Concuss-O-Matic that defined his career as a champion at bantamweight. This augurs well for Nishioka, a guy whose winning streak was precipitated by a move up to junior feather and has come in as high as 125¼ pounds.

What does this mean for the actual fight? It means that Donaire is neither as bad as his detractors claim nor as good as those same people claimed he was when everything was still hunky-dory with Top Rank and Donaire fought as a bantamweight. It means that Nishioka will be at best a tough out; at worst, he will eat Donaire’s lunch, imposing superior physicality and backing the Filipino up while keeping up the pressure.

Expect this one to go the distance, and expect it to be a very close, and possibly controversial, decision. This is a fight people will talk about for a long time; we can only hope that they’re talking about it for the right reasons.

Fox Doucette covers Friday Night Fights for The Boxing Tribune. His weekly column, The Southpaw, appears on Thursdays. Fan mail, hate mail, and a minute on the stool with some water and an Enswell after cranking out three columns in one day can be sent to beatcap@gmail.com.