Last week, on the official ESPN Friday Night Fights Facebook page, the question came up of how meaningful the performance of the women’s team in London was at removing some of the stink of the men’s completely medal-less debacle at the Olympic Games. Your columnist caught a lot of flak for saying, in no uncertain terms, that the women’s performance was absolutely insignificant and had no bearing whatsoever on the perception of USA Boxing. 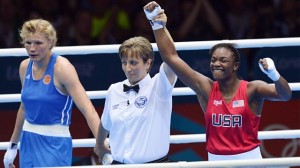 Indeed, I called it a “sideshow”. And it was. Women’s boxing has never found even a decent-sized niche alongside the men’s game, partially because of the much lower skill level involved and partially because audiences can only stomach so much barbarity between women before even the strongest gender-quality advocate has a sense of something very…well, wrong happening in there.

Once in awhile, you get a woman who can actually fight, but those moments are few and far between. When it does happen, and when that fighter gets a chance to tear her way through the ranks of the completely lacking in technique “contenders” and “champions” that form the rogues’ gallery of female pugilism, the results are never pretty. Ann Wolfe can fight. She has been the wind beneath James Kirkland’s wings, and with Kirkland having once again parted ways with her as his trainer, it should come as no surprise if whoever Kirkland fights next knocks him out the way Nobuhiro Ishida did.

When Ann Wolfe fought Vonda Ward, who at 6’6” tall was a sideshow freak even among sideshow freaks and used her height to mask a severe lack of actual boxing ability, Wolfe walked the “All-American Girl” into a “TIMBER!” counter shot that is well worth hunting down on YouTube. The problem with this is that the viewer never thinks “what a great display of boxing ability”. Indeed, the moment carries all the gravitas of spending too much time on Failblog watching skateboarders crack their nuts on steel rails. Ward’s eyes rolled back in her head in a way that no woman should have to experience unless she’s just been fucked.

The moment is not about Ann Wolfe’s genuine skill, the skill she has taught to James Kirkland to make him one of the best junior middleweights in the world, at least when Wolfe is in his corner. It’s about “lol the tall chick just fell down.” Instead of watching in awe the way we would watch something like Juan Carlos Burgos’ FNF Knockout of the Year against Cristobal Cruz, we watch like Beavis and Butt-head, laughing stupidly.

So it goes with the London Games. Who gives a fuck that some girl won a gold medal? Is that somehow going to save the sport from the lack of fresh talent that even in a down year tends to come from American Olympians going pro? CBS wanted to market some of our guys, push their careers and even get them on network television. Instead, we’ll have four-rounders involving US Olympians from 2012 fighting on ESPN, and Teddy Atlas won’t be able to resist pointing out every detail of the American disgrace in London.

Is Clarissa Shields supposed to be some kind of consolation prize for this? Not to take anything away from Ms. Shields, since she worked her ass off, trained hard, and beat the best amateur women in the world at her weight to strike Olympic gold. For her personally, this is the accomplishment of a lifetime, and all credit must be given to that accomplishment on its face.

This does not for one second change the fact that women’s boxing is a sideshow, has never been shown to be commercially viable, and does absolutely nothing to elevate the sport of boxing as a whole, expressly because boxing at the professional level contains women only as a token or a distraction.

I got shit on by a lot of people for having the audacity to basically ask “who gives a fuck?” But the simple fact remains that the question was about USA Boxing in general, and the nature of the sport is such that as the men go, so goes the sport.

This is hardly unique to boxing. If LeBron and Kevin Durant and friends had lost to Australia in the quarterfinals of the men’s basketball tournament and in the process been shut out of medal contention, would anyone care that the women’s team won gold when asking about the effect on USA Basketball? Of course not! The focus would be, and rightly so, that the men totally shit the bed to produce the worst Olympic team in their sport in American history.

So it goes with men’s boxing. Congratulations to Clarissa Shields, but amateur boxing in the United States is a disgrace, and that would still be true even if every woman competing at the Games won gold for herself. Without not just medals, but gold medals, from the men, USA Boxing remains an increasingly irrelevant afterthought, and for a country that has in the past been able to boast the best amateur fighters in the sport, that ought to have people up in arms clamoring for heads to roll and a better amateur system to be put in place.

I shouldn’t be skewered for suggesting that, just because some girl beat up some other girl. It’s not sexist. It’s reality. USA Boxing is a joke, and as the men go, so goes that viewpoint.

Fox Doucette covers Friday Night Fights for The Boxing Tribune. His weekly column, The Southpaw, appears on Thursdays. Fan mail, hate mail, and some idiot comparing me to Todd Akin can be sent to beatcap@gmail.com.