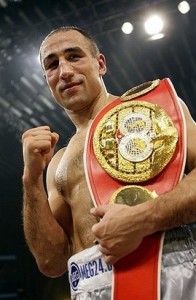 Abraham came out quicker than usual and immediately made his heavier hands a factor against Stieglitz, bothering the defending champ on several occasions. The Armenia-born German star also focused more on straight punches, rather than his trademark wide swinging bombs as well as a more consistent flow of action than has usually been the case.

Stieglitz was never blown out of the water, but his face was fairly battered by the later rounds and it was clear that his solid, but rather pedestrian skill set was simply not good enough to handle a determined, focused Abraham who was, possibly, one loss away from the end of the line as a legitimate main stage fighter.

Now, despite high-profile losses to Andre Ward, Carl Froch, and Andre Dirrell, and a 5-3 recent record as a super middleweight, Abraham is back on the main stage and one of the division’s four recognized world titlists.

After the fight, Abraham told Latin America’s Combate TV that, in his first defense, he will be looking to avenge one of his three losses.