I was doing an interview with a Chicago-based radio show during my recent vacation and, surprise, surprise, the topic of corruption in boxing came up.

The host, Frank Fontana, brought up Oscar De la Hoya as being someone “doing great as a promoter” and then asked, “Do you think he’s doing better for the sport than, let’s say, Don King?” 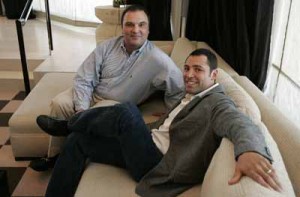 I didn’t really get into detail, but I let it be known that De la Hoya, really, wasn’t all that less shady than the rest of the lot.

Top Rank gets bashed a lot in the pages of my Monday Rant, but I’m nothing if not an equal opportunity basher and the folks at GBP certainly deserve a lashing– especially when De la Hoya gets on his Twitter soapbox and starts rambling about integrity and “saving” boxing.

There’s no denying that Golden Boy Promotions has that golden touch when it comes to getting their fighters back to the front of the line for title fights. If you didn’t know better, you’d think it was them and not the sanctioning bodies calling the shots.  It couldn’t be that they’re doing anything shady, right? In a storage locker full of fishnets, unsold CDs, and gallons of hair care product, Oscar De la Hoya must also have some voodoo mind control potions or, at the very least, some compromising photos of sanctioning body big shots.

Here’s a brief look at some of their recent handy work and the fighters who have benefited from it,

Golden Boy’s Golden Goose, “Canelo” somehow got to be the WBC’s #1 junior middleweight contender without ever beating a top 10 fighter and then was allowed to face welterweight fringe contender, Matthew Hatton, for the vacant title in March of 2011. Since then, while top contenders James Kirkland, Carlos Molina, Vanes Martirosyan, Erislandy Lara, and Alfredo Angulo have been jumping hurdles and fighting eliminator after eliminator for the right to face Alvarez, guys like Alfonso Gomez and Shane Mosley have managed to march straight to title bouts against the red-headed step-champion. Alvarez is a good fighter who is developing nicely for a 22-year-old, but at this point it’s almost more entertaining to see Golden Boy maneuver away from  tough bouts than to actually watch the kid fight.

Chased from junior welterweight after one-sided beatings to Amir Khan and Ricky Hatton, Malignaggi’s career was magically revived when he signed with Golden Boy. After coming aboard, a trio of Paulie wins against club-level pugs (only one actually at the welterweight limit) miraculously got the Brooklyn native a number one ranking with the WBA and then a shot at flat-lining welterweight paper champ, Vyacheslav Senchenko. Malignaggi’s first move as “world” champ is to defend against 22-year-old junior welterweight and fellow Golden Boy stablemate beneficiary, Pablo Cesar Cano.

Yeah, Broner is the next Mayweather. He’s charismatic. He’s the future. Blah, blah, blah. But how the hell did he parlay a thin resume, topped by a blow-out of Jason Litzau and a controversial decision over Daniel Ponce De Leon, into a shot at the vacant WBO super featherweight title? And how the hell did Vicente Martin Rodriguez wind up as Broner’s opponent for the vacant belt?

Everybody loves Erik Morales, but since he officially signed with Golden Boy, every one of his bouts has been for some sort of world title. Not too shabby for a fighter in a new division and coming off a three year retirement. Here’s breaking news, though– The 35-year-old junior welterweight Morales is not a main stage fighter. “El Terrible” is just treading water at this point and, really, he should be no closer to a world title shot than any of the dozen or so junior welterweights who are actually winning divisional bouts.

So, as we can see from this brief summary of recent events, Golden Boy is doing the dance with the devil just as much as the rest of the guys. It’s tempting to overlook them when still dealing with boxing’s Nosferatu, Bob Arum, but it’s so much more fun to spread the nasty truth around.

Now, if all of these creeps could just hop on a flight headed straight for the Andes…

You can email Paul at paulmagno@theboxingtribune.com or watch as he observes former mean bloggers regularly toss salads and hand out social media reach-arounds in exchange for acceptance in the “fraternity.” Paul is a full member of the Burger King Kids’ Club, a born iconoclast, and an ordained minister in the Universal Life Church. He’s also a Featured Writer for the Yahoo! Contributor Network, Fox Sports, and has done work for several other fine (and not so fine) boxing websites which may or may not still owe him money.