Miguel Cotto (37-3, 30 KOs) has just announced that he will meet Austin Trout (25-0, 14 KOs) on December 1st at New York’s Madison Square Garden in a card co-promoted by Golden Boy Promotions.

It was rumored that Cotto, a promotional free agent since early this year, was in the running for a second bout with Manny Pacquiao, but Team Cotto never really confirmed even the slightest interest in a rematch of his 2009 TKO 12 loss. 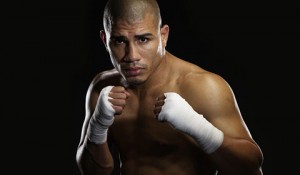 However, Promoter Bob Arum, who will shortly announce Pacquiao’s next opponent, floated rumors to a quote-hungry press, possibly looking to create the illusion that he’s considering anyone other than Timothy Bradley for his prized cash cow.

“We have pretty well ironed everything out with his team, at least I believe that. Now the question is does Miguel want to fight Manny at this time and (his advisor) Gaby(Peñagarícano) is talking to Miguel (about that). It is no longer a money issue,” Arum told the website.

Well, less than twenty-four hours later, Cotto, who had allegedly just sent Arum his proposal, has announced his plans to face Austin Trout, the southpaw from Las Cruces, New Mexico.

Trout holds the dubious distinction of being the WBA “regular” junior middleweight title, a secondary strap won from Rigoberto Alvarez in February of 2011 and defended three times. (For the record, the true title lineage runs through Floyd Mayweather Jr., who beat WBA “super” junior middleweight champ, Cotto, in May). Despite the phony belt, Trout is a legitimate, world class 154 lb. fighter, ranked 5th in the world by The Boxing Tribune and coming off the best fight of his career, a one-sided unanimous decision over Delvin Rodriguez in June.

Cotto, in his last fight, reestablished his world class chops in many eyes by issuing a tough, entertaining challenge to Floyd Mayweather in a unanimous decision loss. Overall, the three-division world champ is 17-3 in world title bouts.