Are you ready for some football? Last night, the New York Giants and Dallas Cowboys kicked off the NFL season in the United States with a contest on prime time television for a cheering nationwide throng who, unless they’re truly rabid baseball fans, were starved for sports ever since the NBA Finals wrapped up two months ago. 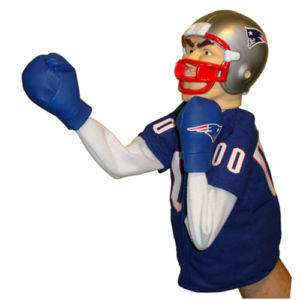 Meanwhile, one of the golden rules of writing for search engines is to cram as much content that you want people to Google search for into your opening paragraph—editors call this “writing for digital media”. Marketing people call it Search Engine Optimization, or SEO for short.

So why did your columnist, a boxing writer working for a boxing website, use those precious characters on pro football teams?

The reason is simple.

Short of typing “Manny Pacquiao Floyd Mayweather Manny Pacquiao Floyd Mayweather” over and over like a cross between a Bart Simpson chalkboard gag and Jack Nicholson in “The Shining”, I can think of no better way to drive eyeballs in front of my work. Type what hot trends people are searching for into the copy, you get ad impressions. Who cares if it’s a one-off bit? Far worse has been done by spam sites, and their gross revenues, at least until someone actually checks their clickthrough rates, tend to be through the roof. It’s con artistry.

More importantly, though, I’m proving a point. This weekend, there are a metric fuckton of fights happening in the Sweet Science. Great matchups between great fighters with title belts (major and bogus alike) on the line mean that it should be a great weekend to be a boxing fan.

Since the Manny Pacquiao-Timothy Bradley fight on June 9, there have been precious few opportunities for the Sweet Science to ingrain itself into the fabric of the American sporting discussion. ESPN2 had its weekly series, at least on those occasions where they weren’t delaying the FNF start for an hour because of a women’s college softball game. There were a couple of HBO and Showtime cards in there, Wladimir Klitschko beat up some schmuck to stay busy…all things considered, boxing may as well have ceased to exist.

That’s the whole problem. What else was going on in sports besides baseball and a couple of golf and tennis tournaments? European soccer doesn’t start up until August, the United States has the Day Without Sports (the day after the All-Star Game in Major League Baseball, when SportsCenter has nothing to show but WNBA highlights, and those don’t count as sports), Australia has footy on the weekend and nothing during the week…why doesn’t boxing take advantage of the lull in the sporting calendar and make itself noticed?

You could put on big fights. People would notice. The weather’s so good that you could even hold them outdoors, under the summer twilight in a baseball park when the local team’s on the road. Yankee Stadium served as a venue for Yuri Foreman’s gutsy-as-hell ninth-round KO loss to Miguel Cotto a couple of years back and everyone ringside talked about how it was a throwback to the good old days. From Hall of Fame Weekend in Canastota in June to the return of the NFL in September, there should be absolutely no impediment to great exhibitions of fisticuffs every single week.

Hell, it’s not like this is completely unprecedented. Combine the Sweet Science with a beachfront venue and what do you get? Well, on July 13, 2001, at the Hampton Beach Casino Ballroom in New Hampshire (which is neither a casino nor a particularly convincing ballroom, it’s mostly just a column-supported roof over an events center of no particular renown, a dump in all honesty), you got Micky Ward and Emmanuel Augustus putting on the 2001 Fight of the Year and setting the stage for Micky Ward to get a payday arranged so that he could fight Arturo Gatti three times and have his retirement provided for.

Once again. There’s literally nothing else on. I get a weekly rundown of the fights happening in any given week in the course of my job, but all I heard anyone talking about this week besides my colleagues here at the Trib was football. My friends who are University of Georgia alumni went on and on about the Bulldogs. My friends from my days at Nevada-Reno were in self-congratulatory moods after the Pack handed Pac-12 opponent California a loss that embarrassed their latte-sipping Commie rah-rah club in Berkeley (and seriously, fuck those guys.) My acquaintances who couldn’t get into ITT Tech waxed rhapsodic about their love of firefighting and the Jets (seriously, fuck those guys.)

Perhaps you noticed a guy from Kazakhstan named Gennady Golovkin last week? Beat the snot outta some Polish dude? Helluva fight, that. Too bad it got counter-programmed against college football. If they’d fought in July or August, maybe someone might’ve noticed.

The point is this. Boxing is not dying—as long as people are willing to be punched in the head for money, someone will always be around to watch—but as a mainstream sporting endeavor, the game committed suicide thirty years ago. Having an “offseason” just when boxing could capture the entire sporting audience is not a step toward resurrection. This needs to be fixed.

Fox Doucette covers Friday Night Fights for The Boxing Tribune. His weekly column, The Southpaw, appears on Thursdays. Fan mail, hate mail, and cultural learnings of America for make benefit glorious nation of Gennady Golovkin can be sent to beatcap@gmail.com.