Oracle Arena, Oakland, California– Hunger is something that can’t be taught to a fighter– and that was the big difference in Saturday night’s Andre Ward-Chad Dawson bout on HBO’s World Championship Boxing.

Dawson (31-2, 17 KOs), the WBC light heavyweight champ coming down to challenge for Ward’s WBC and WBA super middleweight belts, displayed the same lack of intensity and urgency that has marked his career and earned him his fair share of critics, even in the face of plenty of world title success. This time, though, he was facing a prime fighter in Andre Ward (26-0, 14 KOs), burning with a drive to win. 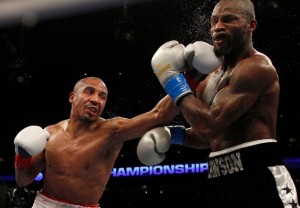 After two close rounds, Ward began turning up the heat in the third, jockeying for position inside and scoring knockdowns in the third and fourth rounds from well-placed left hooks. Dawson, on the other hand, kept up the even pace, frustrated by the knockdowns, but doing little more than keeping afloat with an OK jab and some marginal movement.

Ward owned the middle rounds, controlling the pace and distance of the fight against a Dawson who was steadily being forced into accepting his role as beta dog.

In the tenth, the defending champ fighting in front of his hometown crowd upped the pressure even more, landing some heavy shots to the head of an increasingly dead-legged Dawson and scoring one more knockdown from an accumulation of punches. Dawson would opt not to continue.

Down 8 rounds to 2 on The Boxing Tribune’s unofficial scorecard and suffering through three knockdowns, Dawson made the right decision for a fighter not willing and/or able to go balls-out for a knockout in the championship rounds.

On the televised undercard, WBC lightweight champ, Antonio DeMarco (28-2-1, 21 KOs) shocked those expecting a war in the second defense of his title by blowing away John Molina just 44 seconds into the first round.

A DeMarco straight left hand, landed just seconds into the fight, rocked Molina badly and signaled the beginning of the end. With a staggered challenger before him, DeMarco pounced, putting on pressure and forcing Molina into a doubled over “hit me not” posture that prompted referee Jack Reiss to put an end to the contest.