It may seem as though Julio Cesar Chavez Jr. was born a made man, but back in 2008, when fans in Hermosillo, Sonora pelted the ring with garbage and cups of beer in protest of his controversial split decision win over Minnesota’s Matt Vanda, he certainly didn’t seem to be living a charmed in-ring life.

Jr. sat in his corner, dejected and deflated, protected from the debris with towels by his corner men while his father battled with angry fans at ringside. On that night he gave a heartfelt post-fight interview in the beer-soaked ring about not ever wanting to fight again. 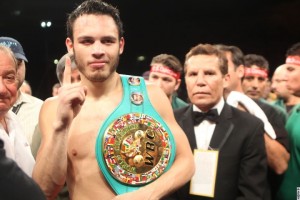 It was one thing to be marginalized by the press, but quite another to be rejected by the very fans who had elevated his father to near god-like status as the face of Mexican boxing. It was Jr.’s first ever public sign of self-awareness.

But Jr.’s arrogance and more than a pinch of ignorance pushed him forward. Days after the Hermosillo fiasco, he would talk to the press and blast his “jealous” critics in the media. In Jr.’s world, the near-riot wasn’t about the controversial decision (One judge had Chavez winning all ten rounds of the closely-contested bout) or the frustration of the fans who felt that they weren’t getting an honest deal with the kid. No, this was about him being picked on by those who were jealous of his wealth and fame. And he was going to keep fighting and keep winning, just to shut them up. He spoke with the bravado of someone used to getting what he wanted and one who knew that it would just be a matter of time before his enemies would be humbled.

After all, this was the kid who sneered at the camera after stopping Jose Celaya earlier in 2008, lifted up his WBC Continental Americas light middleweight title, and angrily declared that he had shut the critics’ mouths and now had to be regarded as the best. A year prior, he was calling out names like Mayweather and Cotto while battling guys like Grover Wiley and Louis Brown.

Julio Jr.’s general lack of self-awareness has been one of his greatest assets, allowing him to walk through the criticisms and snide remarks as a victim, rather than a willing accomplice.

Some people are born into greatness, some have it thrust upon them, and some are back-doored into it like a stolen Cadillac hustled into a South Side chop shop at 3 AM. Julio Jr. belongs to the latter group and has been frustrating boxing traditionalists ever since making his pro debut in 2003. However, there’s definitely something to be said about dumb arrogance, especially if it’s packaged in the right body and surrounded by the right people with the right connections.

Little by little, the critics have had to ease up. The kid, who was forced into child boxing exhibitions at local cards in Culiacan for the amusement of his father’s legion of hangers on, is actually showing some real ability. Always a good physical specimen with a fighter’s instinct, working with Freddie Roach and being around some serious, world class fighters has improved him– even if by pugilistic osmosis.

Chavez Jr. still enjoys the benefits of having a bankable last name. State commissions “forget” to give him the required piss test, despite having already tested positive for a banned substance . He was practically gift-wrapped the WBC middleweight title after the organization straight-armed the rightful champion, Argentina’s Sergio Martinez, out of the picture. There have been allegations of scale-tampering throughout his career, something which has allowed him to walk around as a small heavyweight, make the middleweight limit, and then balloon up to cruiserweight before the pre-fight introductions. It could also be said that despite all of his obvious progress and a vastly improved opponent list, he is still a world champion with three defenses who has yet to face a legitimate Top 5 middleweight.

That last part will definitely change on Saturday when he meets Sergio Martinez at the Thomas & Mack Center in Las Vegas. Martinez, with wins over Kelly Pavlik and Paul Williams under his belt, is the consensus number one middleweight in the world and regarded by everyone “in the know” as the true 160 lb. champ.

This is especially vexing for Jr., who has seen himself as the best for years and finally has the belt that should make it proof positive. But this is where the arrogance of ignorance once again comes in– He’s taken these shortcuts to the top, establishing himself as a world champion without fighting anyone better than a fringe Top 10 contender, yet he is legitimately outraged and perplexed by the lack of respect he gets from the media and many fans. This perceived injustice has fueled his development and hunger to achieve.

If he could apply some critical thinking to the situation, he very well might be intimidated by the task at hand September 15th. But, as we’ve seen from his Face to Face debate with Martinez on HBO, Julio Jr. is a man of few words and fewer cogent thoughts.

All he knows is that he should win, has to win, and, as has been the case throughout his career, as long as he shows up, he will win. Chavez Jr.’s life narrative dictates that he gets what he wants and, more than anything, he wants to beat Sergio Martinez.

The Argentine, with his confident glare and cutting words, represents the brutally critical media, the doubters, the fan’s in Hermosillo showering the ring with beer and balled-up popcorn bags. Martinez is the embodiment of everything standing between Jr. and finally, as he likes to say, “shutting their mouths.” In Jr.’s mind, he is the best middleweight, not Martinez. Forget resumes and title lineage, Jr. is number one because, well, he insists on it. And what Jr. wants, Jr. gets.

Confidence doesn’t care where it comes from, it just has to be there. Jr.’s stubborn entitlement and complete lack of self-awareness makes him a dangerous man. Add a growing skill set, maturing body, and the usual sleights of hand that may or may not be employed to give him an edge, and the task of winning suddenly gets much tougher for Sergio Martinez.

It’s tough to tell you what to expect on Saturday night but, even through layers of ego and entitlement, expect to finally get a glimpse of the true heart and soul of Julio Cesar Chavez Jr.

You can email Paul at paulmagno@theboxingtribune.com or watch as he cements his position as the scribe even “mean bloggers” are afraid to engage.  Paul is a full member of the Burger King Kids’ Club, a born iconoclast, and an ordained minister in the Universal Life Church. He’s also a Featured Writer for the Yahoo! Contributor Network, Fox Sports, and has done work for several other fine (and not so fine) boxing websites which may or may not still owe him money.